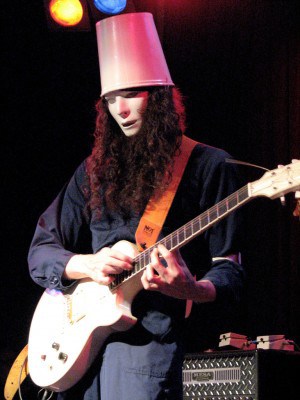 Year after year, it always seems that the Hardly Strictly Bluegrass festival seems to book a few artists that don’t quite fit into the “Folk/Bluegrass” genre (hence the term “hardly” added to the title in 2007). MC Hammer has consistently performed a set aimed at kids for the past few years. Some artists from recent years that fall into this category are Patti Smith, Mondo Cane (Mike Patton from “Faith No More” singing Italian Opera), Randy Newman, and Gogol Bordello. The biggest lineup surprise this year was the addition of guitarist Buckethead.

For those unfamiliar, Buckethead is one of the most popular guitarists of our time. He is rumored to be very secretive & difficult to work with. He releases amazing solo albums, and has collaborated with artists such as Iggy Pop & Les Claypool. He was also the guitarist for Guns & Roses for a brief period before the release of their album “Chinese Democracy”. His name comes from the fact that he performs with a Kentucky Fried Chicken bucket on top of his head & a mask covering his face. He has no backing band.

I really did not know what to expect coming into the show. I was tired and bruised from the OFWGKTA show the previous night, but I was not planning on missing Buckethead because of that. Of all the friends I was with, only one had seen him previously. It was a free show open to the public, so I was expecting a major crowd to come see him out of curiosity. He took the stage really late, perhaps a trait he picked up from Axl? I understand that sometimes technical difficulties make a band late to taking the stage, but Buckethead did not extend his set to make up for lost time (although Golden Gate Park curfew might not have allowed it). He put on an interesting show. For a man doing performing instrumentals, he really knows how to captivate the crowd. He really used the guitar’s killswitch, which I thought was cool. In the strangest moment of the show, Buckethead played the theme song from “Space Jam” while throwing toys into the crowd. Experiencing that was pretty surreal.

Overall, I was somewhat disappointed by the show. He sounded pretty cool, but I felt like there should have been more to it. The venue might have had a lot to do with it, and the show might have been better in a smaller, indoor venue. I love Buckethead’s playing style and solo albums, but I really would love to see him join an established group and contribute his skills to that instead. Then again, I would see him again. I guess I was just expecting something more incredible.