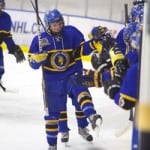 The Spartans needed to change their momentum as they had dropped three straight before the showcase, but it would not be an easy task as they faced strong opposition from the ACHA’s West region: #1 Arizona State, #7 San Diego State, #3 Colorado State and Weber State.

ASU was a foe that had just recently dispatched San Jose State 9-3 back in Tempe, but the Spartans would not allow themselves to lose like that again. The two teams played through a well-played defensive game before the Spartans would fall to the Sun Devils 1-0.

The effort was there, but the result was still a loss; now the fourth in a row.

The next night, the Spartans would put it all together against San Diego State. Energized by Sam Cimino’s return to the line-up, SJSU had their strongest performance of the year.

“There’s a very close connection between our two teams,” said Spartan GM Andy Dickerson. “A lot of our players played with a lot of their players growing up, so there’s a good rivalry there.”

Led by Cimino’s 3 points (1-2-3) and a great game between the pipes by Justin Linn, the Spartans had every part of their game working well: offense, defense, goaltending, power play, and penalty kill.

The third game of the showcase featured the Colorado State Rams. The Spartans were able to tie the game at 4-4 in the third period before the Rams would eventually add 2 more. SJSU sophomore center Nicholas Matejovsky had a hand in each of the Spartans’ four goals, putting one in himself, and adding three assists to that.

“Lately, I’ve been putting on extra effort.” said Matejovsky after practice earlier this week, “I’m going to training everyday, trying to perfect small things in my game. And it’s actually been paying off lately. I’m just happy to see some results. I hope it continues and just gets better from here.”

He would continue that hot streak into SJSU’s final game of the showcase against Weber State, netting a hat-trick to give him 7 goals in as many games for the Spartans.

The Weber State Wildcats, honestly, were not a match for SJSU. Only nine skaters were dressed for Weber, and despite the best efforts of their goaltender Jonas Torgensen, the Spartans broke it open in the third period. With a 7-0 lead, a certain Spartan third-string goaltender was able to make his debut.

Starting goaltender Michael Steininger headed back to the bench to make way for Julian Huguet and, in an Oscar-worthy performance by Steininger, appeared to have caught an edge and fell to the ice. The playful antics did not fool Huguet. “Everybody on the bench thinks he’s injured, except me. I know exactly what’s going on,” said Huguet.

The pressure was on. Julian Huguet, who wore #00 assuming that’d be his amount of time in net, came in to the game for the final 14:38. “I didn’t even stretch. I was so focused on not looking like an idiot,” recounted Huguet.

Ready or not, he’d be tested almost immediately.

As Andy Dickerson said, “He’s got great stories to tell his grandchildren about getting into his game, and making a fabulous glove save and a big kick save within the first 30 seconds of being in his first D2 action.”

Huguet’s first save was nothing to scoff at. In fact, it almost looked like he dressed it up a bit with the glove. According to him, however, that wasn’t the case: “I don’t feel anything hit the glove. No thud, no snag of the leather as it pulls back, nothing.” He thought he let up a goal on his first shot before he finally found it in the pocket. “I think I wished it in,” said Huguet.

The Spartans would finish the game with an 11-2 victory, and plenty of confidence heading in to their final two home games of the year. “Everyone’s starting to click a little bit more,” said Matejovsky. “We’re starting to utilize more established plays. I think everyone’s in the condition that they should be in to make it. I think the high ranked teams will have issues with us, because we could win and make it to Nationals.”

SJSU will likely need a good outing on their upcoming four-game road trip to Colorado next week to stay in good position to make it to the West regional tournament. If they make it through that, they’d be on their way to a third straight appearance at Nationals.

It will be the last game at home for nine Spartans, including Julian Huguet. Could he possibly get more ice time in that game? “Honestly, I’d love to be in the game,” Huguet said, but “if I finish out my career as a Spartan here at home as a broadcaster, I think that’d be equally fitting.” But that’s not all he’d like to see out of the game.

“What I’d love to see is a packed house. We’ve got guys who have been on this team for 5 years. They’ve dedicated a lot of time, a lot of effort, and made plenty of sacrifices for one final hurrah here at home. And I would love to see a packed house to send them off and send us to regionals on a good note.”

The Spartans are back in action tonight at Sharks Ice vs Santa Rosa JC at 7:30 and Saturday vs Boise State at 7:00 pm. Both games will be streamed online at FastHockey.com.On a side note, since this is a club team, money gets tight on their way to the post-season. If you’d like to help sponsor the team on their run to the West Regional, and hopefully the National tournament, please view the Spartans’ website for more information.