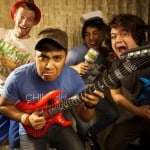 This past Saturday, pop/punk San Jose natives A Four Star Affair won the support of Bay Area local music fans in releasing their newest album A Tragedy Like Me. Over 100 people came out just to support this four-man band in their release party at The X Bar.

A Four Star Affair was founded in 2009 – now currently comprises of Jaymes Rafferty (vocals/guitar), Lawrence Jay Sharma (bass/back up vocals), Joey Lamalas (lead guitar), and Matt Ferry (drums). Since then these guys have been playing as many local shows – including the eMerging Arts series – and giving back to the music community in San Jose. Any fans of All American Rejects and Taking Back Sunday would enjoy their music. Their debut EP, If I Can’t Have You No One Can, was released on April 24th, 2010. Since then they’ve performed with some big names like The Audition, Ok GO, and Neon Trees.

These guys are quite the lovable goofballs as you can see through their YouTube vlogs. They certainly care about the local music scene in the Bay Area and it shows in their performances and their music.

Check out their first music video for their new song – The Group W Bench.