These rising shoegaze rock stars hailing from Los Angeles, CA, have released their third studio album, Neck of the Woods, just last Tuesday (May 8th 2012). It was not long back, in 2006, when Silversun Pickups slowly started to receive attention through their debut album, Carnavas – broke with their first EP shortly before, Pikul (2005). Though Carnavas was received well – it wasn’t until Swoon’s release (2009) that Silversun Pickups really drew the attention of the media, including a surprise nomination into the Grammys as Best New Artist. Now – with the release of Neck of the Woods – Silversun Pickups have received the highest praise possible with Paste Magazine’s spot-on description of why I love this band so much. “Silversun Pickups not only reminds listeners of what a particular band in the ‘90s sounded like, but also how refreshing rock ’n’ roll sounded at the time”.

As far as the album itself is considered – let’s jump back to their Carnavas era, add in a few more bone-chilling elements to it, and you’ve got (in a nutshell) the mood setting for Neck of the Woods. The beginning of the album starts off with a quiet tone then moves along to very loud, grungy parts in, almost, a very natural transition for them, even lightly touching on synth-pop parts in a few tracks. This is a staggering difference from Swoon where tracks were generally the same mood and tone while the sound of Neck of the Woods is so much more broad and haunting, possibly more so than Carnavas or Pikul ever was.  The album, as a whole, is stellar – some of the noteworthy tracks on this album to me are Gun-Shy Sunshine, Simmer, Here We Are (Chancer), and Mean Spirits. The message of Neck of the Woods was to touch on people’s pasts that, relatively speaking, touches a bit on “traumas” from life that linger with us. This is especially apparent in the lyrics of Bloody Mary (Nerve Endings). Brian Aubert says himself that Bloody Mary (Nerve Endings) was written about a friend’s past that he wanted to go back and fix with staple childhood games they did not have time for.

Silversun Pickups have already done so well for themselves – hopefully they will continue to create even more spectacular albums in future. 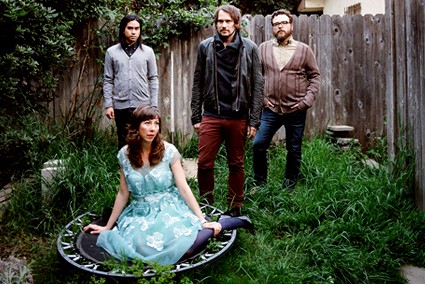