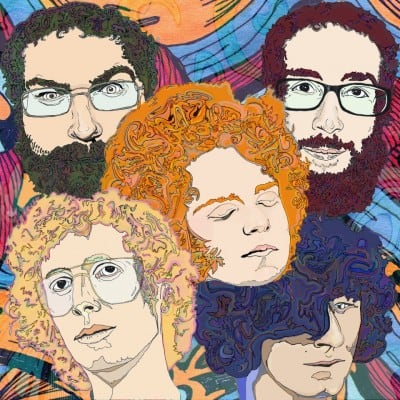 After releasing two EPs, the Oakland-based soulful folk-rock band presents its debut full length. While listening to the album it is hard to wrap my head around the idea that this is a self-released CD by a local group that have only been playing together for about a year. The record, instead,  makes me feel like I am listening to a hidden gem from the 1970’s that has somehow been under the radar this whole time. After watching their superb performance at their record release show two weeks back at the Great American Music Hall (and after watching them play a very memorable acoustic set on my show Daydreaming Disaster several months back) it is evident that these guys are the real deal. In addition to their talent as multi-instrumentalists and vocal harmonizers, the band exudes a sense of companionship with each other. With these set of elements and a seemingly fast growing, enthusiastic fan base, Tumbleweed Wanderers should be around for a long time to come. Oh yeah, and they are a bunch of super cool, down to earth dudes.
A quick note – The Tumbleweed Wanderers record release show at the Great American Music Hall was actually a co-record release show as the also up-and-coming San Francisco alt/folk trio Rin Tin Tiger performed, celebrating the release of their fantastic new album Toxic Pocketbook. Oakland’s Ghost and the City kicked the night off with an opening set that gave a warm welcoming to those that attended a special evening of live, local music.
You can purchase the album “So Long” by Tumbleweed Wanderers here: http://tumbleweedwanderers.bandcamp.com/
“Toxic Pocketbook” by Rin Tin Tiger can  be purchased here: http://www.facebook.com/rintintiger/app_204974879526524
Both releases can also be found on iTunes.
Here is a video of Tumbleweed Wanderers on Daydreaming Disaster.
[youtube http://www.youtube.com/watch?v=7JjmQKphmgo&w=420&h=315]
-Bobby