The Treasure Island Music Festival celebrated it’s sixth annual event this year on October 13th and 14th, 2012 on the famous Treasure Island in San Francisco, CA with some of their biggest artists yet and as a frequent flier of TI events, I must say that TI 2012 was the best one yet by far! There were lots of big names out this year and funnily enough, I felt as if the producers and directors of Treasure Island designed the line-up so that electronic and rap/pop/funk lovers would enjoy the Saturday show and Indie/rock/alternative lovers would enjoy the Sunday show. For example, Saturday hosted artists like AraabMUZIK, Porter Robinson, and Public Enemy and Sunday hosted artists like Joanna Newsom, M83, and The XX (awesome, by the way). I went to both days of the music festival and I loved every minute! Since the festival is held on an actual island in San Francisco, it was understandably ice cold by sunset, as well as windy. The reason it was so awesome through and through was because despite the crisp, bitingly cold air and wind, there was great food like crab garlic fries and deep dish pizza slices and as it got colder, the crowds grew closer and more packed as the headliners went on – so the body heat of the TI fans alone blocked out the cold… much like penguins huddling in Antarctica. Funny thought, right? Aside from the amazing bands, fans, and food – there was awesome merch tables and vendors! I love to shop, so it was dangerous grounds for my new paycheck. Most all vendors were local  stores and brands working of promoting and getting samples out to show TI some love. Some stands that caught my eye were Stolen Sunday (amazingly warm scarves), Undercover Lover (various accessories and apparel), and The Crossroads Trading Company (Secondhand large brand names). I spent too much time AND money at all of these tables, but I loved it anyways. One company table that caught my eye the most was a table promoting the store in Oakland called The Famous Four Colors. It was super chill people and super soft T-shirts and sweater made from all local material and all locally made. They had great designs and next time I roll by Oakland, I’m paying them a visit. Back to the music – Porter Robinson was great as always and ended his set with his most popular original song “Language” which made the crowd go wild. AraabMUZIK was amazing; I hadn’t heard much of them before coming to TI, but after hearing them live, I am a huge fan! The XX and Gossip were mind-blowing as always and I was impressed by the sets they played. Overall, I cannot complain about one single thing. The Treasure Island music festival is always a fun time and I can’t wait until TI 2013! Below are links and videos to get you pumped for next year. TI baby!!! 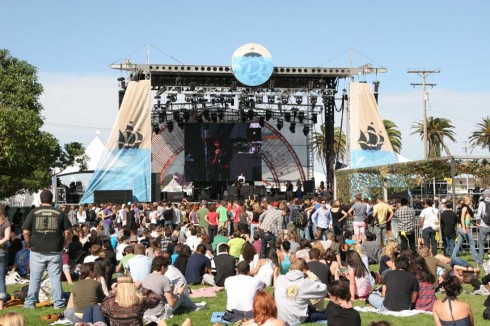