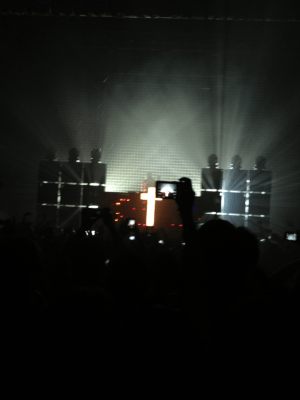 Justice, the electrorock duo from France, has been around for quite some time now. Justice gained popularity from songs like “D.A.N.C.E.”, “DVNO” and “Genesis”. Known for using a large illuminated cross during shows, it was no surprise there was one at the Warfield when they played last Sunday night. The Warfield’s an admirable venue known for hosting extravagant shows for decades in San Francisco. It has held other popular artists such as Bob Dylan, David Bowie, and Above & Beyond. Playing in San Francisco numerous occasions, Justice also played at Outside Lands 2012 last August. I can’t say this was the best show I’ve been too, but a good amount of the people around me was loving the performance. They played many tracks in the hour and a half set. Although the giant cross was a nice touch, the feel of the night wasn’t too crazy with the generic flashing lights. Their stage presence wasn’t anything special either because the duo stood behind their equipment the whole time. Overall the music was enjoyable, but I don’t think it was worth the price they were selling tickets for (advanced $40, at the door $50). If the price is considerably lower, it may be worth going to when Justice comes back sometime in the future unless you’re a diehard fan.