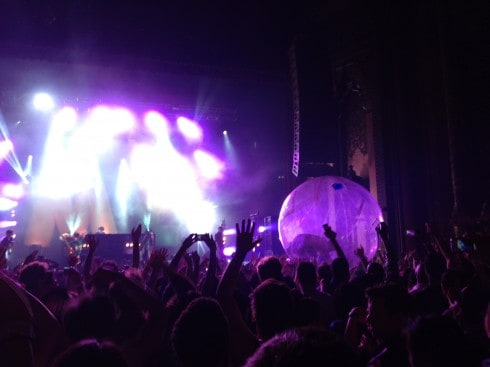 The Fox Theater was perhaps the most fitting venue to host the ridiculous, eclectic fun that is Major Lazer. The 80+ year-old cultural land mark is colorfully outfitted both outside and in with a collection of carefully curated crafts from all over the world. Musically, Major Lazer represents a similar fusion of house, dubstep, dancehall, and reggae. They brought all of these sounds with them on Friday and came out swinging. From the first song to the last the crowd was not disappointed as the musical sounds and styles switched up constantly and all corners were covered. The crowd itself was just as diverse and, may I say, damn sexy. Neon short shorts, metallic spandex, tight tanks, and high tops looked at times like an 80’s exercise video – and rightfully so; the boys and girls on the floor got a workout. The base dropped low and so did the rear ends. At one point, a fan from the crowd was pulled on stage and told to lay down by the stage dancers. Guess what came next? That’s right, “Pon De Floor.” This was just one of many antics which were nothing short of expected at a show like this, including Diplo crowd-surfing in a giant plastic ball. When the show ended the party moved next door to the adjacent lounge, The Den, where Diplo put on a more intimate, but no less high-energy solo performance. Bottles were passed around, clothes came off, a guy threw up, and everyone loved it. Just another night for Major Lazer.