What better way to enjoy your Thursday than to have the night out at the Fox Theater in Oakland listening to a indie rock band. This British quartet has had a few studio albums that have gotten them nominated for awards throughout the years together. They went haitus in 2009 to work on solo projects but came back in 2011. Their performance that night nothing short of great. They played many older singles as well as an amount from their newest album “Four” which was released earlier this year. The jokes and banter from the lead singer, Kele Okereke, between songs really pressed for the audience and band connection. Favorite moment: when Bloc Party played my favorite song “Banquet” (2005). Opening act, Dum Dum Girls, wasn’t half bad either. Their mixture of pop-electro truly helped the people in Fox Theater to the headliners. The strange part of the show had to have been when the crowd (or at least I thought) Bloc Party was ending their setlist with their acoustic rendition of the Calvin Harris/Rihanna’s “We Found Love”. Luckily the night didn’t end with just that song, but consisted of two more including older hit “Helicopter” (2004). Nonetheless, this called for a memorable concert in my book. 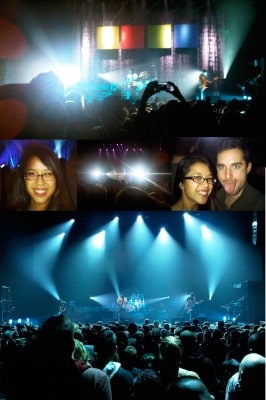