Yesterday I wrote a blog entry, about 5 films I recommend people see. Those films (The Racket Boys, Dreamer, Detonator, Twenty Million People & One Day or Another) were some of the highlights of my viewings throughout March 5th. After attending the festival and seeing three more films yesterday on March 6th, I have some more recommendations for you folks. 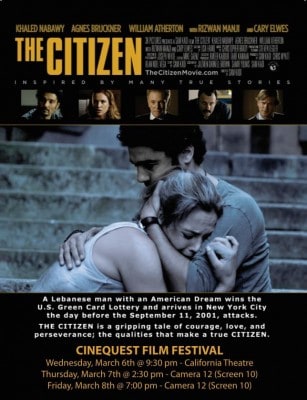 The Citizen tells a story of triumph, strength and courage, some very honorable American ideals, all captured brilliantly by Writer/Director Sam Kadi with his character, Ibrahim. First of all, production quality wise, this might be the best film I’ve seen at Cinequest (I’ve seen 12). I was extremely impressed with the cinematography, editing and score of the film. The subject matter is especially personal to me, and one that is often not shown in this light in Hollywood.

Ibrahim is a Lebanese Green Card Lottery winner who arrives in New York the day before 9/11. He is immediately faced with adversity and the volatile state which ensues after the attacks. The film chronicles his triumph, and struggles as a man who came to America for freedom and to start a better life, only to realize that America isn’t exactly as ideal as he thought, and he has a new set of challenges in post-9/11 America.

Some other Films with screenings left to check out:

Somewhere Slow : 4:30pm San Jose Repertory Theatre (I will be attending this screening)

The Orheim Company: 9:30pm Camera 12
Check out Cinequest.org for the full schedule. And check out Encore day all day on sunday at the Camera 12 and possibly other venues.