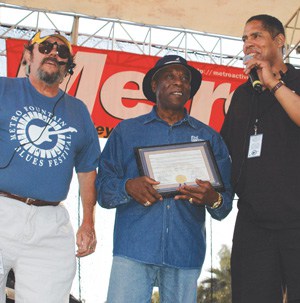 What:  An evening of the blues hosted by 90.5 FM KSJS, and founder of San Jose Blues Week Ramon “Chef Ramon” Johnson.
When:  Doors open at 6:30 p.m. the show begins at 7 p.m.
Where:  San Jose Improv, 62 S. Second Street in Downtown San Jose.
Who:  This event features THE J.C. SMITH BAND as the nights house band with headliner CHRIS CAIN, MAXX CABELLO JR., RON E. BECK’S SOUL REVUE, LARA PRICE AND LAURA CHAVEZ; special invited guests harmonica players AKI KUMAR and MARK “FENNY” FENICHEL.
Why:  This event officially kicks-off San Jose Blues Week 2013 (July 15th-21stwith a “special event” July 24th featuring Johnny Winter performing at Yoshi’s in Jack London Square Oakland).
Admission:  $8 for the general public, $5 for Silicon Valley Blues Society, The Golden   Gate Blues Society, and San Jose Jazz members.
Contact:  Ramon N. Johnson (408) 924-4548/ramonjohnson@yahoo.com
http://sanjosebluesweek.org
https://www.facebook.com/events/329404937190774/?fref=ts
This affordable an entertaining event at a venue normally known for laughs also includes a raffle with prizes that include CD’s, San Jose Sabercat tickets, free guitar lessons from Guitar Showcase, an hour as a “guest host” on Chef Ramon’s Blues Café 2-6 PM Friday’s on 90.5 FM KSJS, streaming at www.ksjs.org, and on ITunes under the “Colleges and Universities” category, 2 VIP passes to the Fountain Blues Festival Presented By The Metro Newspaper12 Noon-8PM Saturday, July 20, 2013, and 2 passes to not only see, but meet the legendary blues guitarist Johnny Winter Wednesday, July 24, 2013 at Yoshi’s Jack London Square Oakland.
Notes:  CHRIS CAIN is one of the best blues guitarists performing today bar none.  His signature notes are immediately recognizable to any blues fan.  San Jose Blues Week is proud to present Chris Cain as a precious musical gift to our community.  Chris performs as a solo act and with the Ray Charles Project.
The J.C. Smith Band.  J.C. Smith was an accomplished drummer with the Back To Back Blues Band when he made the bold decision to pick-up the guitar and front his own band.  Since then J.C. has toured the world with his high-energy band.  J.C. is also known to be the best dressed man in the house!
MAXX CABELLO JR. has successfully done one of the hardest transitions in show business.  And that is to go from a “cute” young performing protégée to becoming an accomplished adult performer.  Maxx is mesmerizing on stage and his career has no limits.  Maxx leads his own band
RON E. BECK’S SOUL REVUE.   Ron E. Beck, a former drummer for TOWER OF POWER has also become a formidable front man.  He and his soul revue have some special surprises in store for the audience on the night of the 16th!
LARA PRICE is a beautiful woman with a powerful voice.  A former Vietnam orphan, Lara has operatic training in her background.  Lara and Laura Chavez, former band mates (The Lara Price Band, Lara and Laura Unplugged), will perform an acoustic set of music.  Lara will also perform at the Fountain Blues Festival Presented By The Metro Newspaper12 Noon-8 PM at St. James Park in Downtown with her The Girls Got The Blues Revue.  Lara also performs with Velvet Plum.
LAURA CHAVEZ is one of the best young guitarist performing today and many a man has bit the dust in guitar competitions to the dynamic Chavez.  Once leaving The Lara Price Band, Laura joined Candye Kane and has wowed audiences around the world with her powerful guitar rifts.  Laura is also awesome on the acoustic guitar.  You are in for a treat!
More Info:  San Jose Blues Week was created by KSJS’s Ramon “Chef Ramon” Johnson in 2005 to celebrate the 25th Anniversary of the Fountain Blues Festival then held on the campus of San Jose State.  Etta James headlined the festival and Johnson wanted to take what was wonderful about the historic Fountain Blues Festival and extend it to the greater San Jose area.  Additionally, Johnson wanted San Jose Blues Week to be a celebration of live music (the blues and music inspired and influenced by the blues), encourage support of live music venues and the brave live music club owners that allow the musicians to hone their craft and grow, the musicians, and, of course, the fans that support the live music scene.  Johnson believes that a vibrant live music scene, and art scene in general, adds to the livability of a city and attracts many out of town visitors spending much needed dollars as they immerse themselves in all things San Jose!
Since then San Jose Blues Week has grown to incorporate venues throughout Silicon Valley.  Venues include:  The San Jose Improv, The Fairmont Hotel San Jose, San Pedro Square Market, the Pagoda, St. James Park, Johnny V’s, The Caravan, The Smoking Pig, The Poor House Bistro, JJ’s Blues Club, The Grand Dell Saloon in Campbell,  The Cats and Number One Broadway in Los Gatos, Murphy’s Law and The Quarter Note in Sunnyvale with more venues joining every day.
San Jose Blues Week Sponsors include: The San Jose Downtown Association, The City of San Jose District 3 the office of City Councilman Sam Liccardo, The City of San Jose’s Mayor’s Office, 90.5 FM KSJS, The San Jose Improv, and the Silicon Valley Blues Society.
San Jose Blues Week is produced by San Jose Blues Week (Ramon N. Johnson, founder), 90.5 FM KSJS, and the San Jose Downtown Association (a big thanks to Amy Anderson and all the staff at the SJDA)