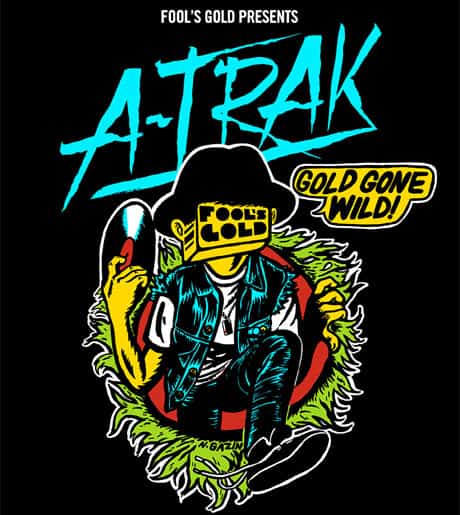 FOOOOOOLS GOOOOOLD, the Gold Gone Wild Tour has officially started. After being in attendance for the New York show I must say that this is something you do not want to miss. Joining DJ A-Trak on the tour is DJ Salva and special guests in different towns. For this show, I was fortunate enough to catch a performance by local rap legend Camron as well. Kicking off the night was DJ Salva. The crowd outside was still making it’s way in the doors and the bartenders were being swamped with orders. His choice in songs got the crowd in the mood and got them ready to get their mind blown by the following performance. With the crowd chanting A-Trak! A-Trak! A-Trak! the time was finally here for him to take the stage.
A-Trak kicked off the performance with a set list of his own remixes he has done such as, “Night Out” by Martin Solveig and “Heads Will Roll” by the Yeah Yeah Yeahs.  Also included were tracks off his “Tuna Melt” album, Duck Sauce album “Quack,” and tracks off his most recent joint creation with Lex Luger “Low Pros.” A-Trak managed to get the crowd hyped and involved, desperately wanting to hear more. What sets him apart from other DJ’s is his excellence on the turntables and incorporating it during his sets. You would think turntablism is a lost art by the reaction of the fans.

After his first set, rap legend Camron was ready to hit the stage. He began his performance with one of my favorite songs of his “Killa Cam,” and immediately the crowd chanted along word for word not missing a beat. Looking around at the crowd you could see Camron airbrush t- shirts and Dipset signs being thrown up in the air. Joining Cam on stage was fellow Diplomat member Jim Jones to sing the classic “Ballin” along with Just Blaze and Dame Dash, wrapping up his performance with his newest Diplomat track “Dipsh!ts” and expressed his love for his fans and hyped up his upcoming project with A-Trak titled Federal Reserve.

As his performance ended, A-Trak decided to switch things up a bit as a part of his plan for his Gold Gone Wild Tour. The first set he played was planned but for his second half, he would freestyle his performance and mix tracks completely off the top of his head. A few notable artists he played were TNGHT, Too Short, Junior Senor, Daft Punk, Prodigy, Grandtheft and much more. The crowd was absolutely electric and the show had its memorable moments during all the performing acts both on and off the stage. A few stand out moments worth mentioning were when the Fool’s Gold mascot Gold Bar staged dived and got dropped, the mosh pit that left a kid with a bloody nose and that chick that I elbowed in the head (sorry about that random chick.) Out of the many times I have seen A-Trak never did it feel this intimate. His interaction with the crowd and the hometown love made it that much better. The Gold Gone Wild tour will continue so make sure you go and enjoy the experience.