As if playing a game across the country is not hard enough, San Jose State University will be taking on last year’s runner up for the national title, the 5th ranked Auburn Tigers. Both teams are coming off wins in their first game of the season, the Tigers defeated SEC West foe Arkansas while the Spartans took down the University of North Dakota. 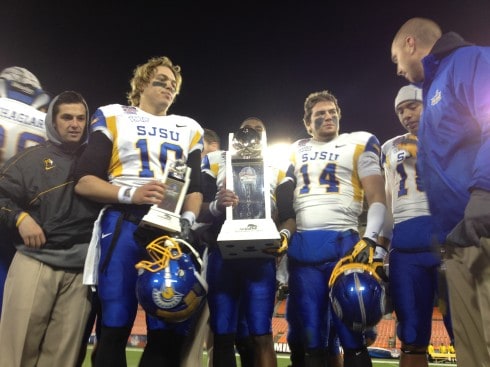 In the Spartans season opener they seemed to answer many of the questions that were floating around the team since spring practices. The biggest of which was who would replace David Fales, last season’s starting quarterback, now in the NFL. Head coach Caragher waited till nearly the last moment before anointing the fifth year senior Black Jurich as the starter. Jurich did not disappoint. Against UND Jurich was 22­25 for 250 yards with three passing touchdowns and one on the ground. Most of his passes were short screens or quick hitters to his dynamic receivers, there were a few throws that were not on target but the athleticism and instinct of the Spartan receivers (especially Tyler Winston) bailed out Jurich.

The other major question hanging around the Spartans would be could they improve upon last season’s anemic defense. The secondary was the lone bright spot last year, but against the run the whole defense struggled. Looking to change things up, SJSU scored a major hire by bringing on board new defensive coordinator Greg Robinson. Robinson came with an impressive resume, he has two super bowl rings coaching the defense of the Denver Broncos from 1995­2000. Last year he also turned around The University of Texas defense midway through the season, leading them from a laughingstock to quality and respectability.

With Robinson and switch back to a 4­3 defensive front, the Spartans looked greatly improved, however they’ll be tested early and often by Auburn’s fantastic offense lead by creative head coach Gus Malzahn. Auburn easily handled Arkansas in their opener last week, even without star quarterback Nick Marshall for the first half the Tigers did not skip a beat. Possibly and arguably more impressive was the job done by the Tiger defense. After giving up 21 first half points, Auburn didn’t allow Arkansas a single point in the second half.

Clearly this will be a major test for the Spartans as they are playing their most difficult game of the season. Similarly to last season they went on the road to face the 5th ranked team in the nation. Losing at Stanford 34­13, while many are predicting a similar score, Spartan players are more than “just happy to be here,” they would like to shock the world at Jordan­Hare Stadium.

● Spartans O­line versus Tigers D­line ­ The Spartans have a young offensive line, with three new starters. Playing in a hostile environment against a powerful and fast Tigers front four, if the Spartans can’t hold their own it will be over early.

Lewis Geist is a recent SJSU graduate and an integral member of all KSJS departments, though is also well known over the air-waves as Mr. Ghost on his jazz show. Lewis also announces sports games and is an all-around heavily contributing KSJS member.