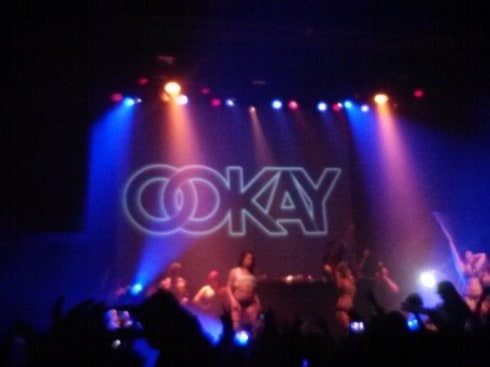 Getting In: There were three of us who attended the Trap City Presents OOKAY & Tropkillaz concert at the Regency Ballroom in San Francisco. Since our tickets were “will call” tickets our line was very fast and after a quick pat-down we went through security. The only thing out of the ordinary was their request for me to dispose of my gum – I’ve been to many concerts (small cafes to festivals, indie to commercial) but I’ve never been asked to dispose of my gum.

Visuals: The building is an antique piece that keeps its nostalgic feel inside and out. There is lots of floor space, a bar at the back and there are other levels as well but the floors were sticky. Also on stage was the Trap City Twerk Squad, a female dance crew who perform while the music, DJ or no DJ, plays. The visual technical aspects were on point: lights, projections, beach balloons, and confetti. I felt that the visual technicians did a wonderful job. Although there were a few spots during the concert where I felt that the choice of light colors, not the timing, were a bit off/distracting and took away from the music, visually.

Concert: Trap City is a San Francisco based concert series featuring trap style DJ’s. This night featured Trap City’s own line up ending with Tropkillaz and OOKAY. My friends and I decided to arrive later since we weren’t fans of the other DJ styles. After we passed security and received our stamps and bracelets, we entered the main room where Ultraviolet was playing; she is a regular on Trap City’s line up. I enjoyed Ultraviolet’s mixing style. It was fluid and natural as she changed between songs with different bpm’s and genres. Although she didn’t frequently interactwith the crowd she managed to capture their attention with a dazzling set.

Tropkillaz is a Brazilian duo consisting of DJ Zegon and Andre Laudz, who specializes in 808 Bass Music. Their set was fun and had a heavy infusion of Brazilian beats throughout the set. I would want to note that although their Soundcloud boasts many songs with heavy beats and high energy, their set varied greatly. Although they included lots of beats, I would categorize their set as mostly downtempo mixed with lounge music. It definitely was not what I expected but was good nonetheless. I would say Tropkillaz were more into playing the music than interacting with the crowd. I enjoyed their set but this made me feel like we were in two separate spaces. 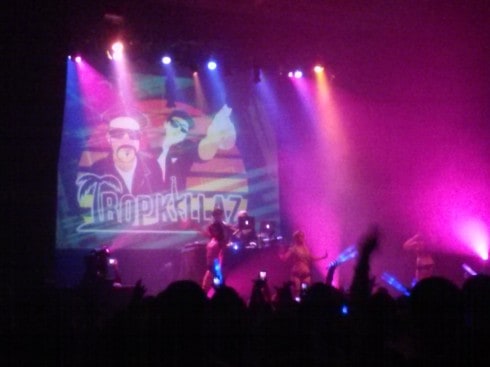 A view of  Tropkillaz from the crowd.

Afterwards, OOKAY came out and the other attendees’ energy went through the roof in comparison to the two other sets that were played. San Diego native OOKAY, who specializes in Trap Music, does produce in other genres but identifies with trap music more. From the on-set OOKAY lifted the ambiance, threw out a couple of compulsory cuss filled greetings and the party started. His set was simply fun. OOKAY embodied the trap genre with a mix of EDM, dubstep and hip-hop influences. OOKAY definitely engaged with the crowd several times. The preselected mixes that were played in between sets were on point and added to the concert experience. As mentioned before, there were some hip-hop tracks played that were either remixes, live mixes or they were played in between sets and one in particular was played several times throughout the night: DJ Snake & Lil Jon – Turn Down For What.

Overall: The concert experience was awesome, the people there on the whole were nice, easy-going and respectful of your space. There were a couple of bad bananas out there but they didn’t take away from the good time I had. The concert staff and security staff were friendly, efficient and fun, I even saw some attendees showing off a slinky trick to a female security guard and even got her to take part in it. The company who is in charge of the Trap City series not only lucked out with these positive staff members but it seems like a “well-oiled” concert machine. Although you may not find parking in the direct vicinity it is definitely worth the short walk but make sure you double check the closing times of the parking lots or you may find yourself in a trap situation.

I definitely would recommend the Trap City series to anyone who wants to experience a trap music concert. The entry and security process was quick and efficient – I still don’t get the gum rule. The music was definitely my style, the ambiance differed depending on the DJ and its dancing and standing friendly depending on how you choose to enjoy the music.