From its humble beginnings as a simple Block Party in Philadelphia, the Mad Decent Block Party, which showcases many artists from the Mad Decent label, as well as many other popular artists, has exploded into multiple cities and even a cruise liner event similar to the HARD events, HOLY SHIP! 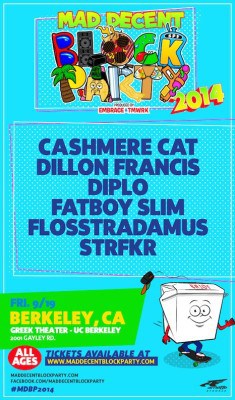 The line-up varies from city to city from a huge list of top-tier artists including: OutKast, RiFF RAFF, the Mad Decent Don himself, Diplo, and many more. Starting July 26th in Ft. Lauderdale and concluding in November with the boat party, the Mad Decent Block Party finally graced the Bay Area with its spectacular line-up.
Friday September 19, the Block Party smashed into UC Berkely at the Greek Theatre with a line-up comprised of: Cashmere Cat, Dillon Francis, Diplo, Fatboy Slim, Flosstradamus, and STRFKR.

This is the story of how I took too long to make up my mind and subsequently missed out on such a well put together show. Or rather, how I was able to salvage my dropping of the ball by jumping on tickets for the after-party, two days before the event. 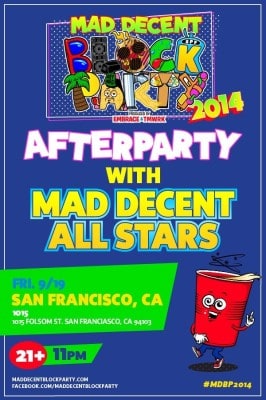 It was all a big blur. One minute I see the show mentioned on twitter, the next I’ve got sweat on my brow, credit card in hand, and a computer screen that says, “Thank you for your purchase.”Headliners don’t get more ambiguous than “Mad Decent All Stars”, so I would say my rationale was that naturally some of the folks from the Berkeley show might show up. Hopefully.

Friday rolls around and we take one of those ride-sharing taxis to the club 1015 Folsom St. from my friend’s apartment in the city. Outside of the club; chaos. People all over the place and a line that wrapped around the corner. I walk up to the bouncer and ask where the line starts. He just smirks and points to the snaking queue and we waste no time to make our way down to the end of it. 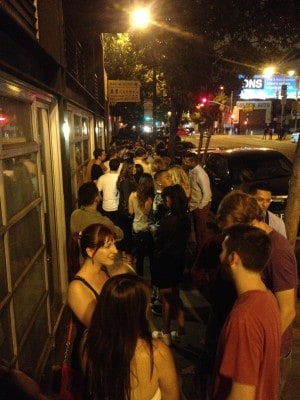 We walk a little ways down and wait in line for about an hour before we actually get in. The waiting in line felt excruciatingly long, and I kept checking Twitter to see if any Block Party artists were making the trip across the bay.

Dillon Francis finally tweets that he’s at the club playing with Cashmere Cat. I turn to my group with a huge smile on my face and relate the news to them, but at that moment Diplo tweets that he’s at his hotel eating a pizza. So I assume that he’s calling it a night. No problem. Cashmere Cat and Dillon are more than enough for a last minute club outing either way. 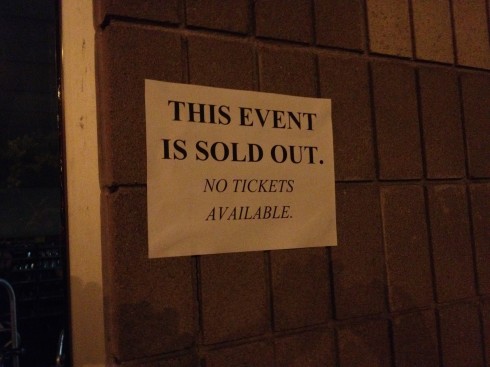 Walk into the club and it’s going off. A combination of all sorts of people for a night out on the town. Some obviously fresh out of the Block Party (no dress code enforced that night), others were fully dressed in club attire; knowing better to overdress than to potentially get turned away because the bouncer didn’t like your shoes. In any case, my two friends and I make a beeline for the restroom, and my girlfriend does the same. We promise to meet back by the bar for refreshments.

Promises are kept and we make our way past the dance floor that greets you when you walk into the doors of 1015 Folsom and onto
the back dance floor where we are met by a sea of ravers, and lucky for us, that pathway took us straight for the stage. No shoving people about to try to get to the front, (not that I actually like doing such a thing either way) instead we simply got a comfortable spot near the stairs that lead up to the stage, which provided optimal vantage of the talent.

As we are just getting settled in, Cashmere Cat plays his last record. All of a sudden I see a man wearing a black baseball cap and brown overalls join Dillon onstage. It’s Autobot, a.k.a. 1/2 of Flosstradamus. The crowd cheers and he comes on the mic to announce that he’s going to play some underground hip-hop.

For a good while they’re playing some really groovy house music, the type of stuff after-hours clubs are known for, while occasionally a hip-hop track plays through the speakers as well. They move on to playing an array of tracks from San Francisco’s well known Dirtybird record label. Once more
the guy in the overalls gets on the microphone and asks the crowd if they know Dirtybird Records, and of course it’s met with a roar of cheer. Dirtybird is best known for the BBQ events they used to do at Golden Gate Park and of course Claude Von Stroke, the man behind the record label. 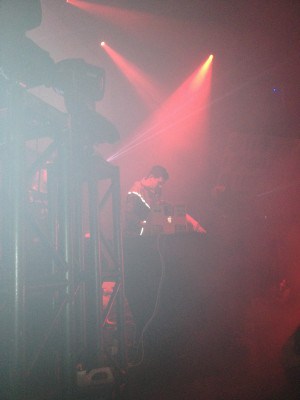 It gets quiet for what couldn’t have been longer than fractions of a second and Dillon starts playing a cheeky rework of the Spice Girls classic track, “Wannabe”. It goes down well and even makes the photographer behind them have a hard time taking pictures whilst bouncing about to the song.

The sets continues bouncing between various forms of house and trap music, until “Get Low”by Dillon Francis and DJ Snake starts transitioning into another song which ends up being none other than “Thizzle Dance”by Mac Dre. When in Rome, right? Halfway through the song, a random white dude comes onstage, “We got Diplo in the house, ya’ll”Autobot proclaims! 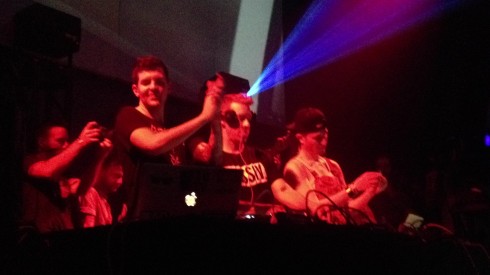 Then they go into a Bay Area / Hyphy music medley. Playing song after song from my middle school and high school years when the scene was really taking off. Diplo even dropped in some more obscure tracks such as “Scraper 2 a Benz”by The Federation. Surprising to me because although the majority of this music had a decent rotation on some other Bay Area stations, outside of the bubble (to my knowledge) they weren’t really well known songs. Can’t say I was really surprised as Diplo has always played a varied range of music on his Saturday night BBC Radio 1 show, “Diplo and Friends”. 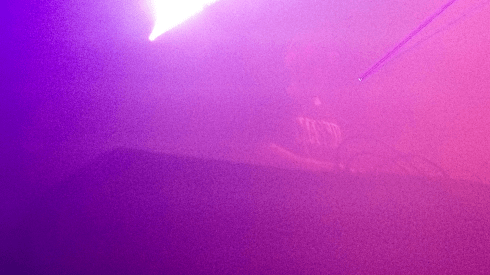 They finally play some of your typical club banger DJ Mustard type of songs and make their way back to the hard hitting house tracks. During this transition, Dillon, who has stopped contributing to the array of sounds and has already put away his MacBook which is littered with random stickers of emojis and other internet nonsense. Suddenly Diplo calls him out. He goes on the mic and uses some very colorful language to inform the crowd that essentially Dillon Francis is being a weenie and wants to go home. He softly declares, “I’ll stay because I love you”and the show goes on.  The night goes on. Suddenly I realize that Diplo is the only one playing now and the other two have managed to scurry away back into the streets of San Francisco.

If you’ve ever been to electronic music shows or festivals or really concerts of any kind, really, one of the most impressive and entertaining aspects of a live show to me is not so much if an artist plays “that one song of theirs that I like”, but rather the ability to read the crowd and play the music that best fits the energy of the audience. You can tell when a DJ has a predetermined playlist when they play individual songs that make people go crazy, but lose the effect when moving from one track to another (DJ Carnage, I’m looking at you) Every time that I’ve seen Diplo he has managed to read the vibe and play from it.

He flies through some RiFF RAFF and bounces through all different types of house, rap, trap and everything in between. Finally it’s around 3 in the morning and this guy is still hitting it hard. Girls getting on stage to dance about and one even manages to get on the DJ’s mixing table and on all fours to twerk for the crowd. They let her stay onstage for obvious reasons.

The room fills with smoke from the smoke machines and I have tough time shooting pictures or video that’s not just cotton candy colored clouds. He finally ends the set by playing a vast number of UK pop tracks until the management finally tells him that he has to stop. It’s now 3:30 in the morning. Hour and a half past last call, and half an hour over what the 11PM to 3AM time table printed on the flyers. So everyone makes like trees and gets out.

On the car ride home I start thinking about shows that I have gone to in the past and why this one felt so different. Why I had such a fun time being packed in with all of these people, when normally when I go to festivals and shows with more open area, I can’t stand the idea of brushing up against other uncoordinated, clearly intoxicated strangers. 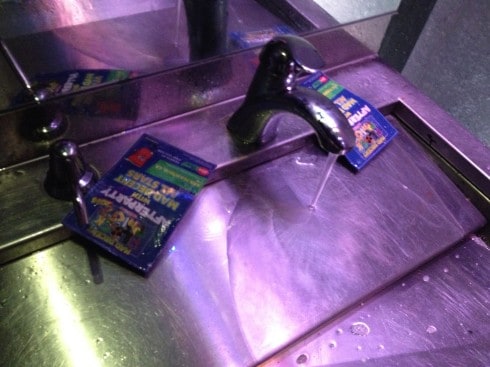 Yet here in this environment I had a blast. If I were to give a reason I’d say it was a combination of many things but mainly two reasons. 1) With the reality that I didn’t know who was playing all I really was riding on was the hope that Mad Decent All Stars would turn out to be a bunch of people from the actual Block Party. 2) The music and the way it was being played and meshing with the vibrations from the crowd really helped reflect the positivity of the audience. So hopefully next time the Block Party eventually makes its rounds again I’ll be able to go. If not, the after party isn’t a bad place to be at either. 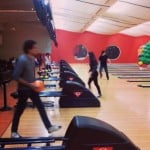