The Venue: This is my favorite venue to go to. It cost me $20 to get in and I got to see a lot of well known bands up close. There must have been only about 250 people, so I wasn’t too uncomfortable. Also, there was free parking around the venue making this an added little bonus to the night! 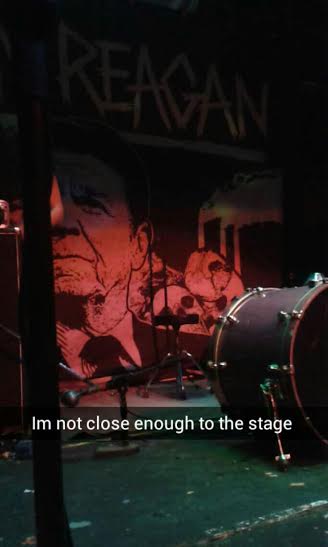 The Bands: This tour for me was very different than most metal shows I go to. At most of the shows I’ve been to, the bands typically are all from the same subgenre. The first three bands to play were thrash/punk bands, while the last two bands to play were stoner/sludge metal.

Connoisseur opened the show and they were fun to watch as the venue was getting more and more packed. After they finished their set, I was walking to the bathroom and bumped into Tony Foresta, the singer from Iron Reagan. Every time I’ve seen him in concert (whether touring with Iron Reagan or Municipal Waste) I’ve gotten a chance to talk with him. After that, his band, Iron Reagan, was up next. I was at the very front the whole time and they really got the show going. They played stuff from both their old and new albums which got the whole venue filled to capacity. Once the mosh pits were going, everyone in the venue seemed to be having a good time. 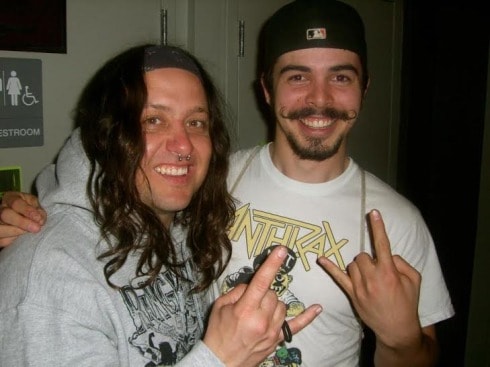 Tony Foresta throwin up the horns.(circa 2013)

The third band to play was Power Trip. They put on such a good show that I had to pick up one of their CDs at their merch-table. Similar sounding to Iron Reagan (but a little more on the hardcore/crossover sound) they were a great act to follow Iron Reagan. I’d never heard of them before, but after seeing their concert and jumping in and out of the mosh pit, I became an instant fan.

So now for the second half of the show- Today is the Day & EYEHATEGOD: To define sludge/stoner metal, I’d say it sounds like what you expect: very loud, droned chords with screaming to match either a simple guitar or simple drum beat. Each band had fast and slow songs which got the crowd either head banging or going crazy depending on the tempo. I do like this type of metal, but after watching three fast paced bands play for a few hours, the following hours made me feel as drowsy as the music. Maybe it was because it was getting late or the Red Bull I drank earlier wore off, but it felt like an odd transition to me. The crowd was super into both bands playing which helped me get into it was well, but in retrospect, I would have enjoyed it more if the headliners played first. I don’t listen to this type of metal much, but I definitely got my money’s worth and got to experience a type of show that I haven’t before. 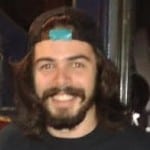 This is my first year at SJSU, I transferred over as a junior from De Anza. I’m going for a communication major with a minor in PR. KSJS is perfect for me because my hobbies are going to concerts and making my own music. I love my work and on my spare time I enjoy doing things outdoors like hiking Mission Peak or camping in Yosemite. I’m also not afraid to admit I’m a huge Harry Potter/Lord of the Rings fan!