I had been looking forward to this day since the announcement of the next LED San Jose back in February, especially once I found out Dillon Francis would be headlining. (If you’ve ever heard my radio show, you know that I would travel to the ends of the Earth just to shake his hand.) 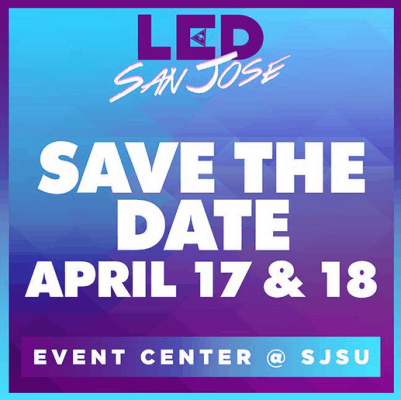 Trust me, I saved the date. And you best believe that I was 7th in line at the box office to get my ticket, because Jazzy Jay don’t mess around. 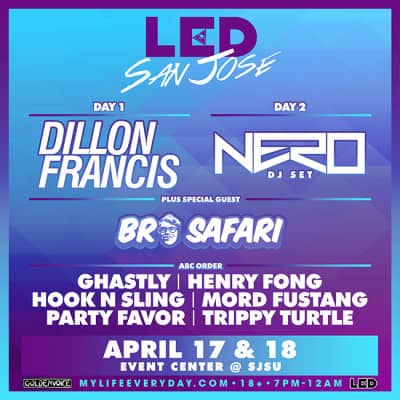 The rest of the lineup was released, and thanks to this LED soundcloud playlist, I was pretty pumped up: 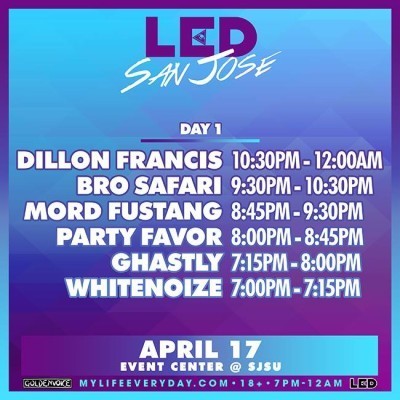 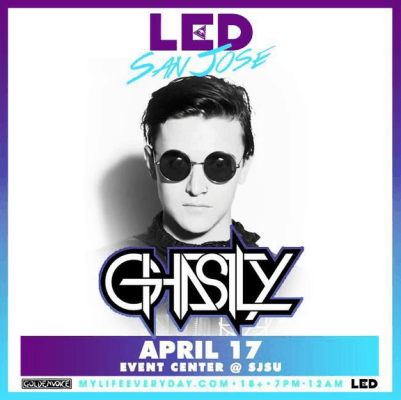 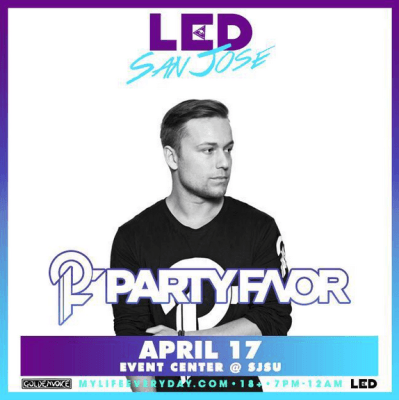 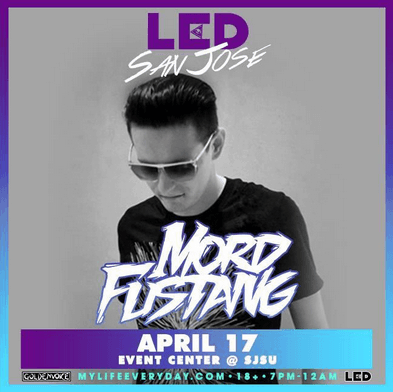 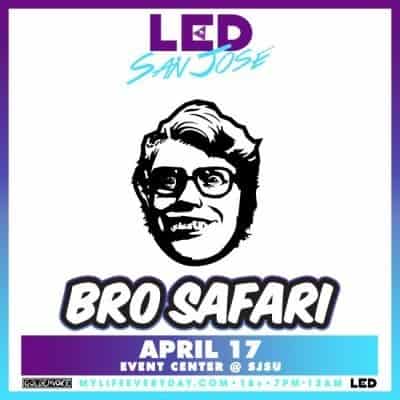 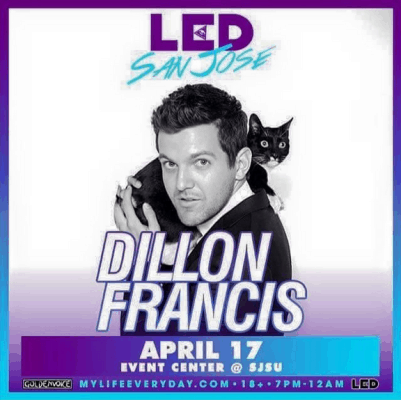 I got in line around 6:30pm and the line was surprisingly short for a SOLD OUT show. I walked by a guy with the same shirt and I yelled out, “nice shirt!” and he yelled back, “nice hat!” I realized we were wearing the same Dillon Francis merch so I had to snag a pic before going through security. 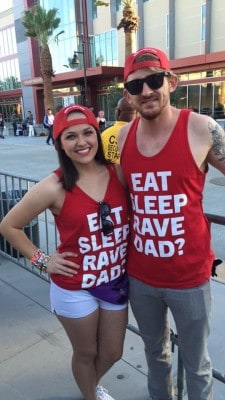 Despite my love for electronic music and festivals, I had never actually been front row at any show, EVER, in my WHOLE LIFE. Today was the day. (I had also never been in line for a show before the doors opened; lots of firsts for this show!) 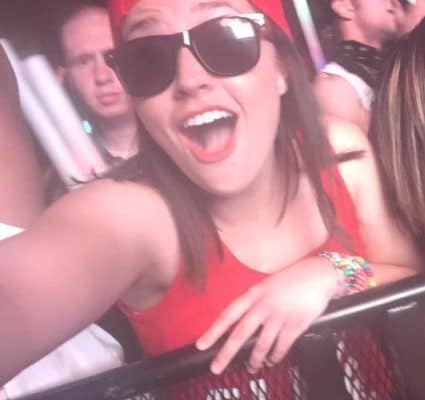 The guy behind me is obviously thrilled that I snagged a spot right in front of him.
The girls next to me had seen Dillon Francis live a few times before and seemed just as excited to see him again, which only made me more excited! We instantly became new buddies.

Ghastly knew exactly how to warm up the crowd. The room filled quickly and the energy was through the roof. 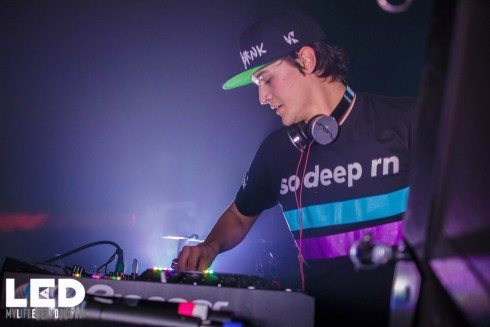 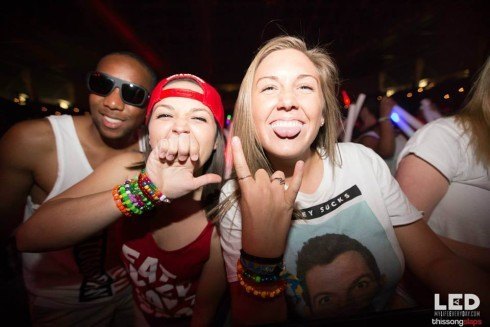 Party Favor got on stage and let me tell you; I liked his sound before I knew what he looked like, but I knew that after this show someone would probably create a tumblr page dedicated to this rising DJ. He’s gorgeous. 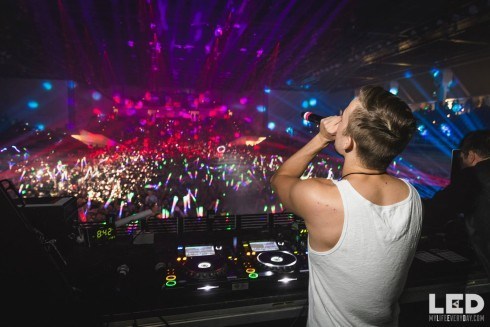 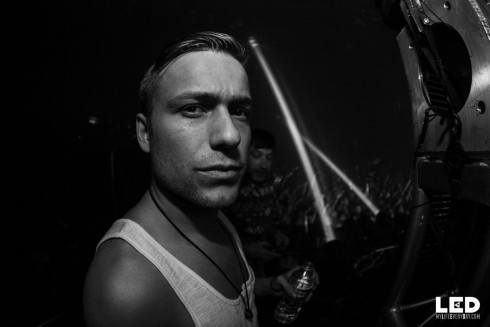 He played his remix of “I Can’t Take It” by Dillon Francis and BAM! Dillon shows up on stage and I LOST IT…. I was screaming at the top of my lungs and I admit to fangirl-ing so hard and I am not ashamed. He wasn’t supposed to go on until around 11pm, so his presence this early in the show just gave me a shot of adrenaline straight to the brain. 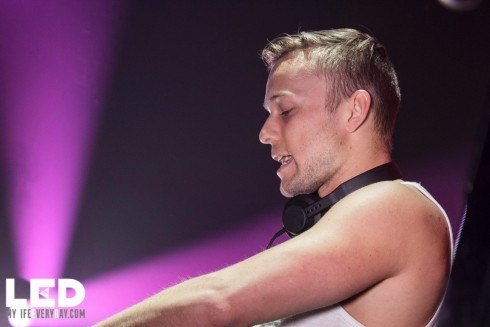 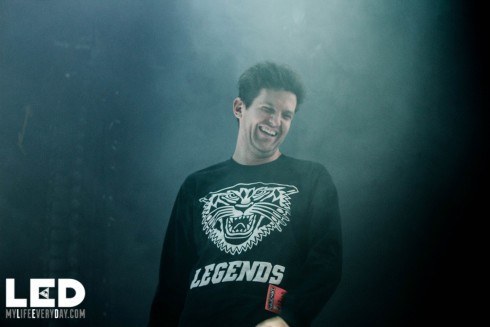 Next was Mord Fustang, and I remember back in my DJ training days, someone called to request one of his songs for me to play on-air, and I had no idea who he was. I did some homework and found out he’s been in the game for quite some time. At this show, however, he didn’t seem to bring that “new” sound everyone was hyped for. He was kind of like the grandfather of the show, as if right before he got on stage he told the others, “watch how it’s done.” Except for, that’s not what the crowd wanted. Instead of appreciating the true talent he possesses, the crowd seemed to snooze during Mord Fustang’s set. 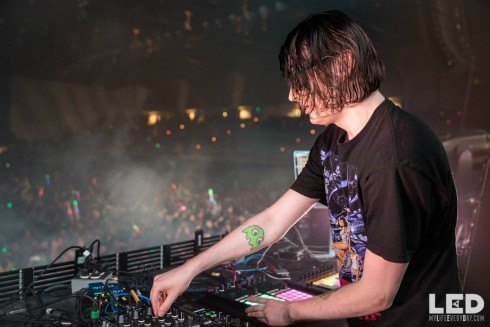 Then Bro Safari got behind the table and his hype man got on the mic, whose name I later learned from Twitter was Sharpness. This guy knew how to interact with a crowd. He pointed at people and sang the words to songs like “To Ü” by Jack Ü, to which I proudly sang along. Sharpness caught a moment of me really feeling the song and he threw up a heart sign with his hands and pointed to me and smiled. Hearts right back at you, Sharpness. He threw water bottles into the crowd and the new friend I made next to me caught one and roared, “You are BAE!” 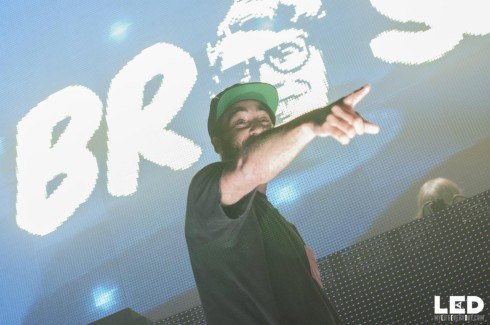 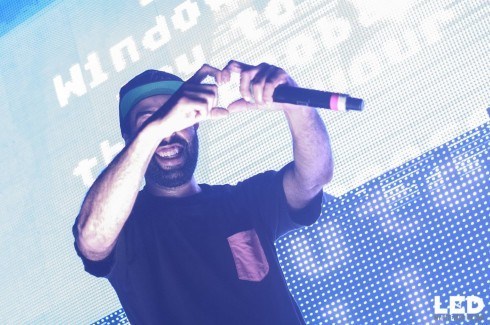 {Can we just acknowledge how cool it is that a photographer at the event caught this exact moment on camera?} 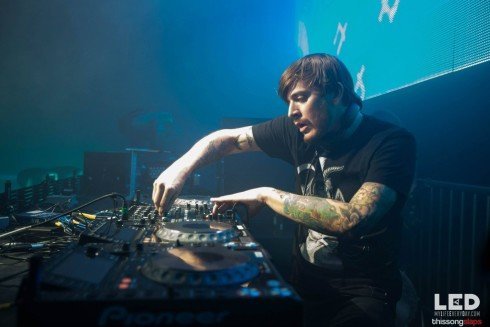 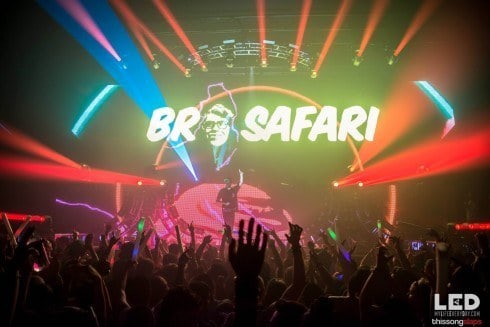 Then Bro Safari dropped “Beats Knockin” by Jack Ü and Dillon stepped out onto the stage FREAKING AGAIN and my inner fangirl took over. I went from zero to one hundred way too quick, I was sweating at this point. But I was still having an amazing time standing front row. 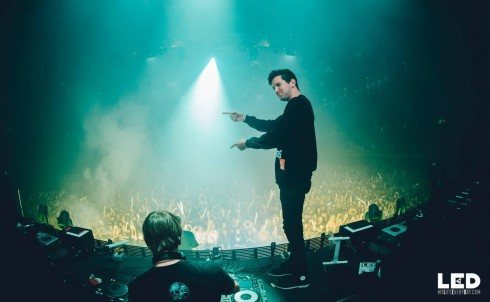 I was in the perfect spot to see Dillon sneak behind the table to get ready for his set, and I truly believed that my entire life had been leading up to this moment. His infamous DJ Hanzel voice boomed over the speakers and everyone went CRAZY!

“Get Low” started playing, and I was probably the only one to think to myself, “Dillon, why would you open your set with the one song that’s currently making you blow up this year?” Granted, he slowed it down a bit and only played about 20 seconds of the track.

He got up on the table and shouted over the mic, but definitely did not jump as high off of it as he could because if you watch his snapchats, you would know that he thinks DJs who do that are simply mad! 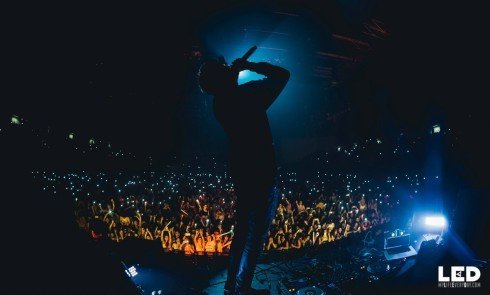 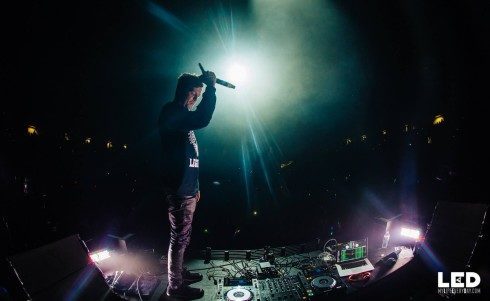 A few songs in he played his remix of “Runaway” by Galantis, because duh. And at the part where they sing, “I wanna runawaaayyy,” I put two fingers up and motioned like they were running, and I promise you Dillon looked out into the crowd, saw me finger dancing and laughed. 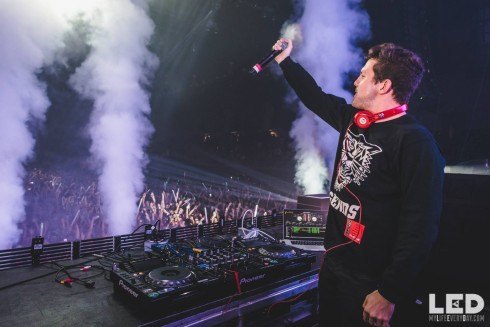 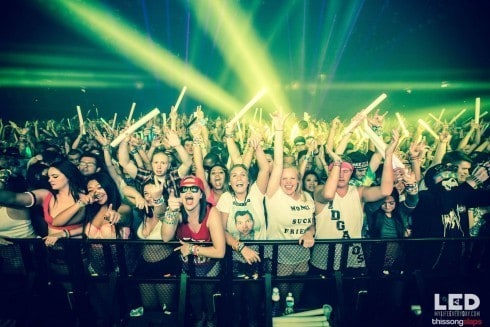 The show was fantastic. However, I was totally unsatisfied with the lack of crowd interaction Dillon gave. I mean, compared to Sharpness, Dillon had the energy of a wet mop.  He stayed behind the table for the entire time, and I get it, he’s doing his job. He’s getting paid to DJ, not to throw food at the crowd or bring underage girls on stage to shake their asses. I kept having to remind myself that once the show ended. (Maybe because I was genuinely hoping he would let some of us on stage just so I could brag about it later.) 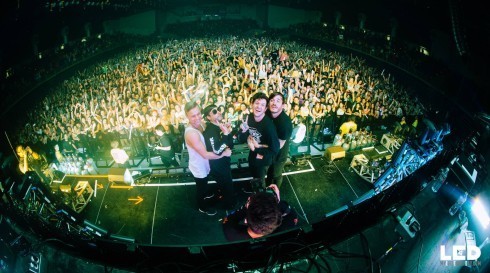 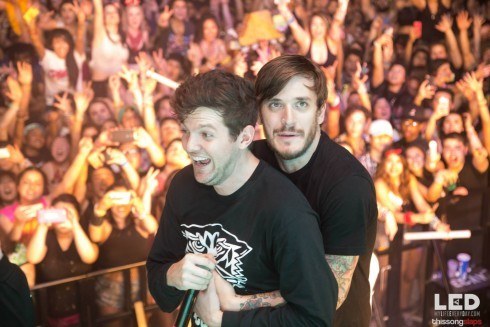 Overall, it was a night to remember and I can’t wait to see Dillon again this year for the many shows he’ll be performing at.

Oh yeah, before I went home, I snagged a picture with Party Favor: 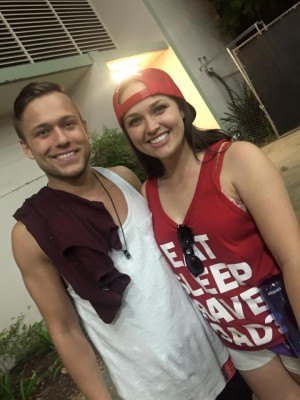 He told me his name was Dylan (uh-oh, I see a trend) and I realized that I don’t get nervous when meeting these people, because they’re people. I shook his hand and introduced myself, we took a picture, and I told him about KSJS and we talked for a good minute and a half. It wasn’t an interview, he didn’t even have to give me the time of day. But he did, and that was super cool.

Check out this gallery I put together with just a few of the HUNDREDS of pictures taken that night.

Links to all albums on LED Presents Facebook page. 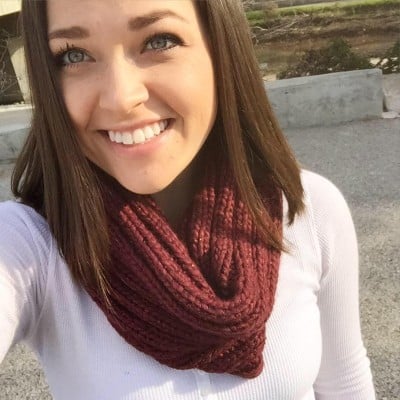 DJ Jazzy Jay | KSJS Promotions Manager
I talk to you on the radio every Thursday morning from 6-10am on my show The Morning Mocha 2.0 and sometimes I play a lot of house music so… (:
Tune in here: ksjs.org/listen