Wisconsin Dells, WI– Its seems like with every new year, a new Latin festival is created to fill the missing music niches in the US. This year we have Los Dells Music Fest to appreciate.

Pros: Simply put Los Dells is a unique music festival that is Latino in all spectrums. This past Labor Day weekend, I witnessed a celebration of music hearing acts from reggeaton to electronic to regional mexicano to pop Latino to cumbia to  alternativo to urban rhythms. Additionally, Los Dells is the 1st mutli-genre Latin music festival located in the Midwest that gives Latinos (everyone really) the opportunity to see acts that normal would skip or simply not tour WI. Many of these acts mentioned during their sets that this was their first time performing in WI; artists like Carla Morrison, Sofia Reyes, Prince Royce, Reik, and many more. Not only was the lineup amazing but the location was surreal. Located in Woodside Sports Complex, there were 3 stages in which the main stage was surrounded by woods. (Noteworthy to mention that the organizers decided to make this a benefit festival in which proceeds would go help Houston and the victims affected by Harvey.)

Cons: Its great that the producers of Los Dells wanted to create a space for Latinos to enjoy and celebrate their culture through music, art, and food but whats not cool is to overprice every aspect to make a buck out of it from the parking to the food. I’m a concert junkie, so I’ve been to several shows and I understand that prices tend to go up, but $4 per taco was ridiculous. Also communication from the organizers to the attendees about late or cancelled performances was non-existent. Some kind of notice would have been appreciated instead of just endlessly waiting by the stage to only realize that Larry Hernandez was not gonna show up. Lastly, exiting the parking lot was chaotic. It reminded me a lot of the Shoreline Amphitheater parking situation. On the 1st day it took an additional hour to leave the venue because no one was directing traffic. It got better the 2nd day, but there was still a good wait before you actually got going (so it was smart to use the bathroom before you left the venue).

Overall, Los Dells did great for its first go around. I’m excited for the potential that this young festival has in becoming a music staple for  festivals in the US. Until next year, Viva Los Dells!

Here’s a recap of some of the performances: 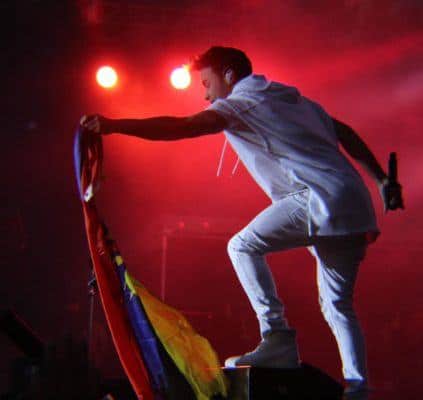 Whether you’re a fan of Prince Royce or not, you can not deny the fact that he gave one of the best performances during Los Dells. Bringing the night alive with his bachata hits to his own rendition on the 1961 classic ‘stand by me’. Among the crowd, he was a particular favorite for all the teens and millennium girls. And I can see why, with his innocent flirtation to the roses he got for his fans to walking along the isle greeting heart-struck fans, he was too damn cute. That night he reminded us why he remains the prince of bachata. 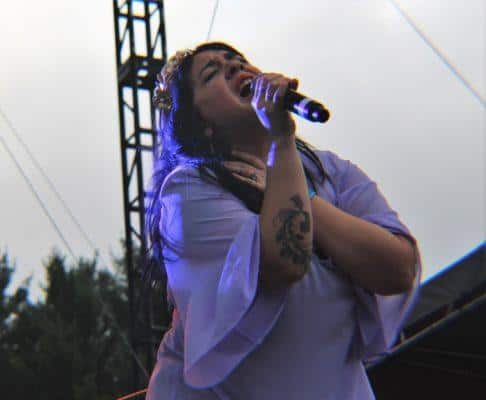 Carla always seems to perform at the right time; whether it’s the golden hour at Ruido Fest or a night show or a cloudy rainy day at Los Dells. Her music made me feel like I was in a magical place within the woods. With her golden flower crown and fluid like lavender shirt, it was like seeing a fairy perform. Highlight of her set: While holding a Mexican flag she said, “¡Nunca guachen la cabeza, sean orgullos de sus raíces!” A powerful statement followed up with her hit song “Yo sigo aqui” 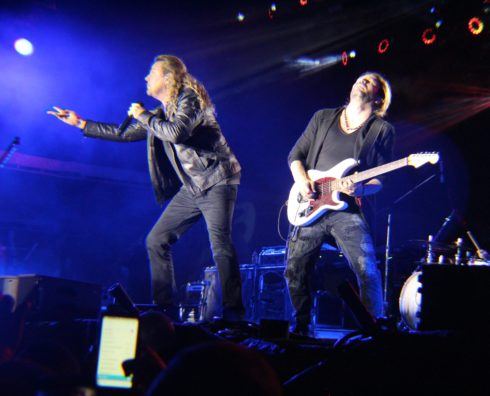 Off the entire lineup, hands down Maná was the most anticipated act and the crowd fav. With a repertoire so extensive as theirs,  the crowd wanted to sing along to all their favorites. And that’s exactly what ended up happening, playing hits like ‘me vale’ to ‘mariposa tracionera’. 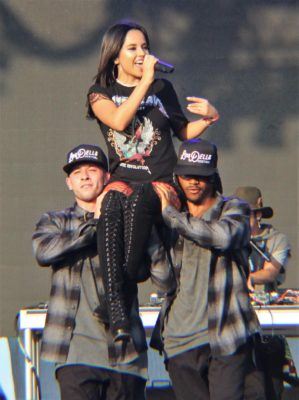 Becky G made a statement opening with ‘todo cambio’.
She basically told us that Becky G is no longer a teenager
pero una mujer con todo su derecho. This sexy Latina put
on a performance that was puro fuego [pure fire]! 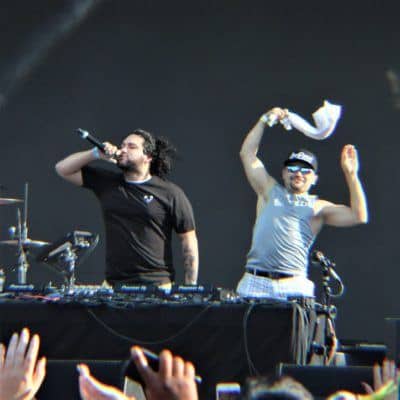 Deorro’s set list was so good that I literally lost track of time. He opened with a Selena song!!! (that immediately caught my attention) And it didn’t stop their. He brought out some tribal (a subgenre of house music that was big in Mexico in the early 2010’s) and he had us dancing to la cumbia de Carmen to ‘mesa que mas aplauda’. Deorro easily set the festival vibes to a day party, having everyone jumping even los gueritos.  ¡za za za yacuza yacuza!

Political Activist Band(s) – Las Cafeteras & Making Movies
With the current political climate in the US, many of the bands took time from their set to address some of the issues they felt passionate about like immigration, peace, racism, etc. Its definitively no surprise because Latino artists are not afraid to speak out. And I am a believer that pop and politics should mix. Some of the bands that brought their activism onto the stage included Las Cafeteras and Making Movies. 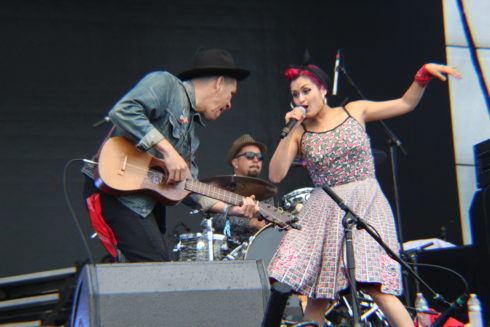 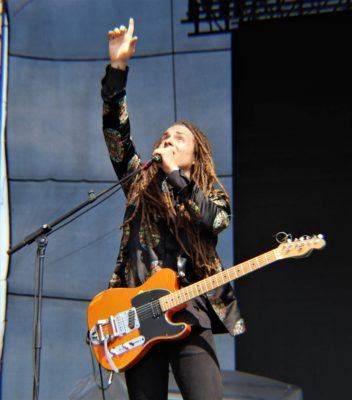 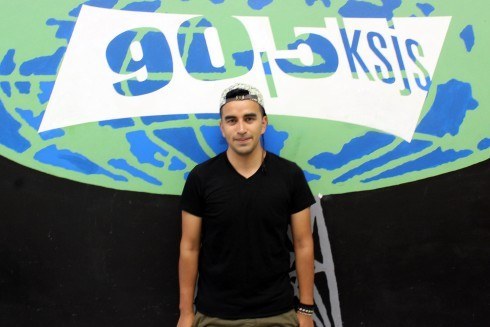 On-air, I go by the name of Kydd Sasquatch. You can catch me playing all your Latin favorites and soon to be favorites on my show called ‘Pico De Gallo’. Asi que no se lo pierdan, solamente en 90.5fm KSJS!