The Bay Area was blessed with a star-studded two-day Hip-Hop festival in the form of Rolling Loud. The festival, which originated in Miami a few years ago, has expanded to multiple regions across the globe. The Bay Area leg of the festival took place this past weekend at the Shoreline Ampitheatre in Mountain View. KSJS was in attendance along with 20,000+ other Hip-Hop fans from all over The Bay and beyond. It was a pleasure to be there to experience the first ever Rolling Loud in California, while balancing photographing the event, and turning up with our homies and fellow KSJS DJs who made the trek.

Travis Scott, Lil Wayne, and ScHoolboy Q headlined, while a plethora of other big names in Hip-Hop performed alongside them–Lil Yachty, Uzi, XXXtentacion, Young Thug, and Kodak Black–just to name a few. The combination of buzzing relevant artists with up-and-coming talent made it hard to decide which stage to stake out. Whether you spent your time at the Loud Stage or .WAV Stage, or if you ran back and forth frantically like DEBO, you were guaranteed to witness some iconic moments regardless of where you were.

Bay Area representatives Marty Grimes and Larry June set things off in the early afternoon on the .WAV Stage on Saturday, while Nef the Pharaoh and SOB x RBE had memorable sets a bit later on the Loud Stage. Nef brought out Slimmy B of SOB x RBE for the track, “Bling Blaow” and the crowd went hyphy. He also performed a KSJS favorite and classic, “Boss Me” & his verse off E-40’s “707”.

One of the only blunders of the weekend was the altercation backstage between Lil B (“The BasedGod”) and A Boogie Wit Da Hoodie. This lead to A Boogie and PNB Rock (and entourage) jumping Lil B and as a result, The BasedGod did not perform. Instead, he gracefully got on stage to announce the news to his fans. In true Lil B fashion, he stated he was not looking for retaliation, and that he “has love” for A Boogie. The two squashed the beef via phone, Lil B said he “forgives” A Boogie, and of course, they posted about it on Twitter on Monday.

Our very own Yung Kellz had nothing but praise for Smokepurrp and Trippie Redd’s respective performances, as well as G Herbo, who most of us agreed was a standout Day One set. Controversial artist, XXXtentacion had an interesting time on stage. He performed “Fuck Love” and brought out featured artist, Trippie Redd. The two passionately sang the track at the edge of the photo pit barrier, swaying back and forth in the arms of screaming fans. While he pleased his die-hards and day-ones, he left some, who were less aware of his antics and his performance style, unimpressed. X spent too much time organizing mosh pits and taunting fans, which caused many to flee in anticipation for Lil Uzi Vert.

Lil Uzi Vert’s performance was a special one; he brought out Playboi Carti (who killed his own set just before Uzi took the stage). He performed many of his hits including very well-received renditions of “You Was Right” and “XO Tour Llif3”. He ended his set with a StrongArm favorite–“Neon Guts”, a collaboration with Pharrell Williams off his most recent LP. He was the perfect lead-in to Travis Scott which was the Grand Finale to Day One. An impressive performance made even more so by several short interruptions to acknowledge Lil B’s importance and proclaim, “protect Lil B at all costs”.

On Sunday and were able to catch KSJS favorites, Buddy and IDK’s sets just prior to Philthy Rich. The Philthy Rich set was especially important for us, as he performed his recent hit, “Right Now”, a record which emphasizes his collaboration with San Jose artists, Traxamillion and Ziggy. Seeing thousands of people move to Ziggy’s hook was especially gratifying. KSJS has been supporting Ziggy’s music and promoting his growth since 2012.

Rexx Life Raj took the stage after Philthy; Raj is another artist we have been playing avidly since 2012. Rexx is managed by Ari Simon, a former KSJS DJ and member of Urban Department management team. Seeing Rexx’s brand expand rapidly has been amazing, and this performance was his biggest and best look yet. After Rexx Life, Harlem emcee, Dave East took the stage and performed various gems, proving his music doesn’t lose a beat in the live performance realm.

Other Sunday highlights included Curren$y. He ran through all his classics going all the way back to the original Pilot Talk, plus, he was backed by a live band which is a rare form nowadays. Curren$y wore a 49ers jersey to show his excitement to be in the Bay Area and complimented the crowd on their top-shelf clouds of smoke coming from around the stage.

Yung Kellz saw his favorite artists, Famous Dex, who provided an energetic set. The Bay Area’s own, P-Lo, was the “surprise guest” on Sunday and inevitably, he performed timeless slappers. “Put Me On Somethin” got the crowd hype, but “Never Sorry” and “Every Night” sealed the deal as fellow HBK members, Iamsu! And Kool John were on stage throughout P-Lo’s set. You know this performance was lit because even the now-viral lemonade guy was giggin’. While P-Lo was putting in work on the Loud Stage, Kodak Black was killing it on the .WAV Stage with another memorable Day One performance. 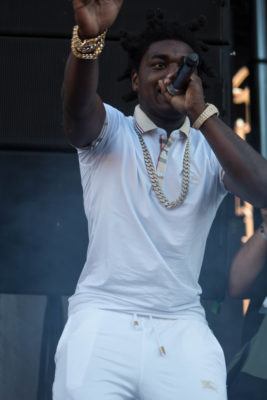 Isaiah Rashad had a performance that left everyone in awe. Although many of us at KSJS saw him earlier this year during his Bay Area tour stop, seeing him perform standout tracks from Cilvia Demo and The Sun’s Tirade in front of this massive crowd was especially meaningful.  Similarly, Young Thug killed it. He performed tracks from various facets of his discography. Thugger’s set was the perfect lead-in to the most anticipated set of the weekend by a vast margin: Lil Wayne. Weezy’s performance was everything ride-or-die fans wanted. He ran through hits from his near 20-year career, and even brought out Young Money artists Mack Maine and Gudda Gudda. Trippie Redd got on stage and turned up to Lil Wayne, which is solid evidence of “Tunechi’s” undeniable influence on today’s Hip-Hop landscape.

There were so many other dope performances throughout the weekend, which lead to us missing certain sets, however the general consensus was: ScHoolBoy Q did a great job closing things out. He performed various hits off his two most recent LP’s, Oxymoron and Blank Face, and even took us back to the Habits and Contradictions era with a lit performance of “Hands on the Wheel” and the thought-provoking fan-favorite, “Blessed”. DEBO saw ScHoolBoy Q at Outside Lands Music Festival back in August, but was left with a small void after not hearing her favorite track, “Dope Dealer”. We are happy to say, that void is gone now.

Similar to Travis Scott on Day One, Schoolboy Q was vocal in expressing his love for Lil B, and called the drama “sucka shit”. ScHoolboy is another artist who KSJS has been supporting since he burst onto the scene. Seeing him headline a festival in California in front of 20,000+ fans (and shout out Lil B) was the perfect way to end an amazing two days of Hip-Hop entertainment.

With the absence of Hip-Hop festivals in the Bay Area since the demise of Rock the Bells in 2013, this was a great way to fill that that space in every Hip-Hop lover’s heart. We can not wait until Rolling Loud 2018. If you weren’t in attendance this past weekend, a So-Cal trip in a few months to catch Rolling Loud Los Angeles might be an option worth considering.