Ah, the “Biggest Night in Music.” We know that there are plenty of recaps and reviews of the GRAMMYs out there, but we’re here to offer some different perspectives on such an influential yet divisive event in pop culture. Check out what our DJs thought of the performances and the awards below! 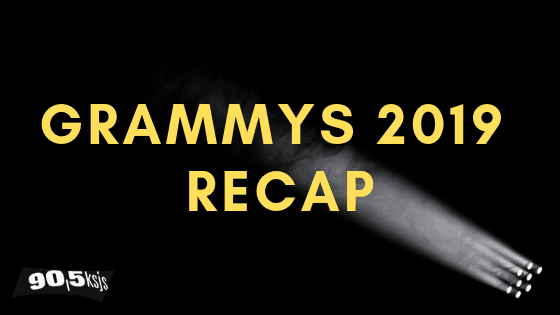 First I’d like to clarify I am not a misogynist, nonetheless, Cardi B’s Invasion of Privacy does not deserve the Grammy for Best Rap Album. I understand the precedent that it set by making her the first female to win this prestigious award. However, it should be noted that on her breakout song, “Bodak Yellow,” she essentially steals Kodak Black’s flow from “No Flocking.” This song pushed her to the upper echelon of mainstream rap and allowed her album to receive the most air time on the radio out of all the albums nominated.

Personally, I believe Nipsey Hussle’s Victory Lap should have won best album but it received little to no air time on mainstream radio. I do appreciate that Cardi said she is sharing the award with the late Mac Miller. To be fair, the Grammys have not always gotten it right with ‘Best Rap Album’ the last handful of years. This is not as atrocious as when Macklemore’s “The Heist” won this award over Kendrick Lamar’s classic “Good Kid, M.A.A.D City” back in 2014 but I digress.

In terms of performances, I think Travis Scott bounced back from that awful and misleading Super Bowl halftime performance. Like many Spongebob fans, there was a moment where I genuinely believed they were going to perform “Sweet Victory” but “Sicko Mode” happened instead. I liked that Travis Scott had James Blake on stage with him to sing the intro to “Stop Trying to be God” and followed it up with “No Bystanders,” my favorite song off Astroworld. I have seen Travis Scott perform live and I’m delighted he was able to redeem himself. -Aikman Fang

2019 GRAMMYs was a long one this year. First of all, I loved that Alicia Keys brought out a panel of strong powerful woman. You cannot go wrong with bringing out Michelle Obama! Loved the positivity being projected and the idea of feeling and accepting the love.

Very surprised by some of the award winners. I love me some Cardi B, she’s wild and crazy, but I did not think that she would win Rap Album of the Year. As much as some her songs turn up a club, she’s not the greatest rapper at all. But hey, can’t take that away from her. I am even surprised that a country artist won Album of the Year. I can honestly say that I have never heard a Kacey Musgraves song ever. But compared to other big artists in the category such as Drake, Cardi, Post Malone, etc., I did not think that country would rule over.

Lady Gaga’s performance of Shallow was very different than how I thought she would perform it. Instead of doing it in a way that would get the water works going, she rocked the hell out of it! I also enjoyed the touch of pianist, Chloe Flower, to Cardi’s fashion-raunchy wild performance. So many amazing musical artists. I literally could on and on but I got to get to bed. Fun show! –Julia Gaona

Yet again, the Academy has shown that they don’t know a thing about good rock music. Starting with the “Best Rock Song” category, the winner barely even a rock song. I think St. Vincent is an incredibly talented and important artist, but I would hardly call her 2017 release a rock album. And even so, “Masseduction,” the song that ended up winning the award wasn’t even the best in the category. I think the award should have gone to “Rats” by Ghost for it’s amazing production, killer riffs and sheer theatricality.

For the “Best Metal Performance” award, it could be argued that they picked the right song out of the ones that were nominated (I personally think Deafheaven should’ve walked away with it, but “Electric Messiah” was a killer track as well). However, when you look at the albums from which the songs came, there are far better tracks that are much more deserving of the Grammy nod to choose from. To me, this is rather disheartening as the only small morsel of recognition that metal music gets from the mainstream media does not even feature the genre’s best work. Sad!

Now let’s talk about the “Best Rock Album” category…. Stuff like this is why I can’t take the Grammys seriously. I find it hard to fathom a world in which the new Greta Van Fleet album is recognized as a good album, much less one of the best of the year, much less the WINNER OF BEST ROCK ALBUM OF THE YEAR! But sadly, that world exists. We are living in it. That award should have gone to Ghost for their amazing 2018 release, Prequelle, and everybody knows it. C’mon Academy, pull it together. One other thing that irked me to bits was the fact that the legendary Vinnie Paul from Pantera was not included in the “In Memoriam” portion of the show. The amount of influence that that man had not only on the world of drumming, but the whole landscape of metal music as well is not something to be taken lightly or forgotten, and I find it appalling that he was not recognized this year.

The only thing the rock side of the Grammys seemed to get right this year was awarding Chris Cornell the “Best Rock Performance” for the song “When Bad Does Good” which I think was a touching final send-off for the late rock and roll legend. In summary, the Grammys pretty much went as expected this year. -Stevie S. Diesel

The 2019 Grammys was once again another big year for music. Aside from many big names in music from missing this year’s award show such as Childish Gambino, Beyonce, Taylor Swift, Ed Sheeran, Ariana Grande, and many more this year’s ceremony was still a good one. I still wish Ari got to perform at the Grammys though, her new album is amazing!

A few of my favorite moments from this year’s Grammys included Lady Gaga’s beautiful speech about mental health, hearing Drake call out the Academy and sharing some inspirational words to young and upcoming artists, “The point is, you’ve already won if you have people who are singing your songs word for word, if you’re a hero in your hometown. Look, look if there is people who have regular jobs who are coming out in the rain, in the snow, spending their hard-earned money to buy tickets to come to your shows, you don’t need this right here.” Keep being real Drake, thanks for speaking the truth.

Michelle Obama’s random cameo was also a delight. Lots of history was also made such as Childish Gambino’s, “This is America” being the first rap song ever to win awards like Song/Record of the Year. Cardi B was the first solo artist to win the Grammy for “Best Rap Album” Other fun things that weren’t exactly aired on the Grammys but relates to the artists included Dua Lipa’s reaction to winning a Grammy for “Best Dance Recording” for her song “Electricity” with Silk City, it was priceless. Following Cardi’s first ever Grammy win (love how she mentioned that she was going to share the award with Mac Miller, RIP), she came home to hearing her 7-month-old daughter Kulture, say the word, “Mama” for the first time which was emotionally beautiful for Cardi and everyone else who can relate to hearing a child say one of their first words for the first time.  -Monique M

Life is real crazy right now. So proud of our song and our @recordingacademy win! See you on the carpet real soon ❤️❤️❤️ @diplo @iammarkronson

As a rock fan, I’m disappointed that they don’t televise the alternative and rock awards anymore. (Regardless of whether I even agree with the nominations in the first place.) However, I was pleasantly surprised with the amount of guitars represented throughout the performances.

Post Malone started out playing his song “Stay” on an acoustic guitar, then hopped on an electric one with the Red Hot Chili Peppers. It was a weird joint-performance, but I’ll take it. Janelle Monae killed it with her guitar, H.E.R. sounded AMAZING (shoutout to our local artists!), Shawn Mendes rocked a little harder than normal, Lady Gaga was aggressively headbanging to the calm beginning of “Shallow” (which was odd, but I love her enthusiasm), and even Travis Scott featured some guitar in his performance. And I ADORED how St. Vincent transformed the electronic breakdowns of Dua Lipa and Calvin Harris’s “One Kiss” into some rad riffs.

Mainstream rock is in a weird place right now, and adding a guitar to a song doesn’t insinuate a revival, but between underground rockers and the instrumental elements that these pop artists are including in their performances, I don’t think it’s fair to say that the genre is dead. -K-3PO

What’d you think of the show? Sound off in the comments below!