People tend to associate cheesy, overdramatic power ballads with Valentine’s Day. But we’re here to challenge those expectations and bring you some left-of-center tunes to make you feel all the feels on this ooey gooey day.

Whether you’re looking for something to serenade your significant other with, or to use as the soundtrack to daydreaming about your crush, or to lament about your heartbreak or loneliness — we’ve got an atypical song for you here. Grab some chocolate and indulge yourself in this compilation of underrated romantic bops selected by our KSJSers. 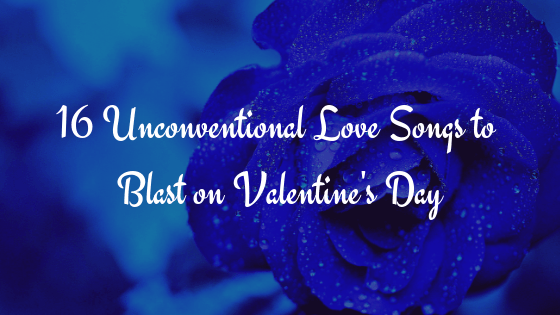 1. “Dizzy on the Comedown” by Turnover

Saying that long-distance relationships are hard is quite the understatement; it’s a challenge that involves the utmost emotional dedication from all parties to make up for lost time. Turnover, a Virginia Beach-based pop punk turned dream pop band, encapsulates all those warm and fuzzy feelings of missing a significant other. “Dizzy on the Comedown” is the leading single from their 2015 release Peripheral Vision, and is one of my favorite songs of all time. Featuring fuzzy guitars and lyrics that perfectly capture the sweet feeling of devotion, “Dizzy on the Comedown” is ideal for any indie fan and hopeless romantic. -Lacuna

This song is done by one of my favorite rappers. And this is an out of the blue kind of song by Futuristic. As a fast pace rapper you don’t see Futuristic do lovey dovey songs often, but it’s a great song. He talks about how much he is in love with this girl and that she is more than a girlfriend — she is his homie. He even says that he won’t play games but he will play video games with her. This track will want you to wish you have someone special whom you call your girl and your best friend. This is the second song released by Futuristic in 2019 after he promised to release a song every two weeks. The cover art for the single was selected by fans on his Instagram story via polls. -DJ TNITE

This song is about a “nice guy” who is looking for a nice girl to fall for him for a lifetime, but that’s not Bülow’s vibe; she’s just trying to have fun. Just like a lot of people in today’s society, they just want to use each other and not actually care about one another; pretty sad but true. The title itself states “this is not a love song”. She says “it is about the excitement of meeting someone for the first time. Initially it felt so new and overwhelmingly good, but I think I just wasn’t ready for that commitment yet. Or at least that’s what I told myself.” This song is pretty much perfect for those who are incapable of being committed to someone. -Emily D.

This song may be called Valentine’s Day but instead of celebrating love, the song is about missing an ex lover. LANY is an indie/synth/dream pop band from Los Angeles. Their second album Malibu Nights was written between Jan. 4 and Feb. 14 of last year by singer Paul Jason Klein, who was going through the aftermaths of a painful breakup with his previous significant other, Dua Lipa. When I first heard this track, I immediately bawled my eyes out because it made me think of my past relationships and the heartbreak that I too had to go through. Feel all the emotions, including pain, love, loss and sadness in this song and the overall record. Well done, LANY. -Monique M.

Tessa Violet is a rising indie pop artist that’ll catch you off guard — her bluntness is surprising, endearing and quite humorous. She’s aware that her directness is awkward, which she makes abundantly clear in the first verse of this little mid-tempo jam. If you’re tired of listening to esoteric metaphorical songs and want to get right to the point when daydreaming about your crush, this just might be the tune for you. -K-3PO

On the surface, Kid Cudi is accepting that he will always be alone in some way and opens up about his depression. As the saying goes, misery loves company and this song is somewhat comforting despite its gloomy outlook with the chorus repeating itself. I believe this is one of Cudi’s more emotionally impactful songs and can help anybody that doesn’t have that special someone to celebrate Valentine’s day with. -Aikman Fang

Devin Townsend is often referred to as the mad scientist of heavy metal, and his larger than life compositions, zany lyrics and wildly eccentric personality have rightfully earned him that title. This song is no exception to the outlandish style that we’ve come to love from Devin. Originally appearing on 2002’s Physicist and updated on 2012’s Epicloud, Devin refers to “Kingdom” as the first real love song that he ever wrote. The track features immense, fleeting walls of guitar, monumental choral arrangements and is written in an unfaltering major key. Lyrically, it is rather cryptic and ambiguous. There are many theories as to what exactly the lyrics are about, but my personal favorite, and the one that makes the most sense to me, is that it’s about the blissfully confusing and unique rush felt when falling madly in love with someone. It’s as kooky as it is beautiful and will forever remain on my “shameless love song” playlist. -Stevie S. Diesel

I love me some spooky music. So when I saw that Ryan Freaking Gosling had a band making spooky monster music with a children’s choir, well, I had to check it out. The song “My Body’s A Zombie For You” features a doo-wop intro that leads into a love song about two zombies in love, and how despite their bodies decaying, their apparent monstrosity and their foul smell, they still have love for each other that will carry on through their undeath and into the other side. With the children’s choir chanting the title of the song and beautiful piano work from Gosling to send out the song, you are left with a sweet and unusual feeling of listening to monsters fall in love. -Evan Mendoza

I first heard this song in the movie Drive with Ryan Gosling. The soundtrack is filled with recent artists creating music that has an 80s, electronic, synth vibe. You can never go wrong with 80s music, full of layered sounds. While the artist does not mention the word love like in many other songs, she is describing her counterpart facing many odds and complexities, to which she sings,  “...and you have proved to be a real human being and a real hero.” This describes her admiration and potentially love towards this great human. -Julia Gaona

Relationships aren’t as clear-cut and cute as premium Valentine’s Day cards that play sappy 80’s love songs. Tangled with so many different emotions ranging in intensity, relationships are challenges in emotional strength. Scranton, Pennsylvania-based emo and indie pop punk band Tigers Jaw captures the uncertainty of love well in their track “Hum” off their fourth album Charmer. Using a duet structure, Ben Walsh and Brianna Collins illustrate a bitter separation they haven’t fully emotionally recovered from. What I love most about “Hum” is that its duet nature shows there are multiple sides to every story, and the possibility that there may be more similarities than differences during such bittersweet times.  -Lacuna

Can a Twilight/Disney star make music? Yes he can! Booboo Stewart created a band with his friend Davin named “That band Honey”  (that’s how they capitalized it). They just released their first single “You & Me,” on Dec. 21, 2018. And this song is about a girl he can’t live without. The song starts off as the singer being all set for their date as he brought wine and chocolates and tells her to clear her calendar. This, the beats and the guitar immerse you in the music and make you want to listen to this song over and over again. -DJ TNITE

Many people might look at the title of the song and assume it has a different meaning just because it says “Don’t Wait”. It’s actually a catchy love song full of heavy percussion and rich, soulful delivery that adds impact to simplistic lyrics like, “Let’s laugh and cry, until we die” and “You won my heart, without a question / Don’t wait for life.” There’s also an acoustic version for those who want to slow things down and utilize it for their wedding day. -Emily D.

Don’t let their goth looks fool you into thinking what genre their music is. No, they aren’t a heavy metal band if you were wondering… Pale Waves is an up and coming indie pop band from England that consists of four members, Heather Baron-Gracie, Ciara Doran, Hugo Silvani and Charlie Wood. The group has played many shows and festivals worldwide including Outside Lands, Reading and Leeds and plenty more. If The 1975 and Paramore had a musical baby, it would probably be this band. “Heavenly” is a catchy tune about admiring someone and reminding them that they’re “SO HEAVENLY.” This track will have you wanting to jump and dance around your room while thinking about the person you have a huge crush on. -Monique M.

Conan Gray hates that all his friends seem to be getting into relationships and he can’t even get a text back from his crush. He rips up love letters. He pops heart-shaped balloons. He overdramatically throws fruit across a football field. He sulkily dances around school lockers while singing about spilling his guts out. This song and video are a whole lot of embittered indie pop fun. -K-3PO

I do not hear many people talk about Lenny Kravitz as much as they should: He is a musical genius. This song debuted back in 1998 and still stands the test of time of an underlying love song. He clearly is singing about someone else and everything that has opened up all his senses to why he “belongs to” them and vice versa. Soft rock that you definitely cannot miss out on. -Julia Gaona

“I want something good to die for, to make it beautiful to live”

Stoner rock legends Queens of the Stone Age released their magnum opus album Songs For The Deaf in August of 2002. The album was filled to the brim with fuzzy, abrasive guitar riffs, gritty vocals and freakin’ Dave Grohl on drums. Not exactly the place you’d look to find a heart wrenching love song, right? But low and behold track 9 on the record remains one of my favorite love songs to this day. Sonically, “Go With The Flow” takes after the rest of the album’s sludgy, hard hitting production, but from a lyrical standpoint, this one is a little different. The songs depicts the struggles of a man in love with a woman with a dark romantic past. Her previous relationships have left her scarred and unable to grow romantically close with anyone, so right when things between the two start to get serious, she leaves, seemingly without emotion. Rather than fight for her love, he knows nothing he does can change her past so with his head in his hands, he just “goes with the flow.” I’m not crying, you’re crying. -Stevie S. Diesel

Share your own favorite unconventional love songs in the comments below! And tune in to 90.5 FM or stream us online for a variety of bangers year-round!