Starting on Wednesday, October 9th, PG&E will begin proactively shutting down power to nearly 800,000 people in 34 counties across Northern and Central California because of increased fire risk due to dry winds that could down power lines. PG&E says the power shutoffs will not happen at once on Wednesday. The company will implement one round of shutoffs at a time, starting in the most northern part of California, from midnight until 4 a.m. Another round of outages will be starting at noon as the weather shifts toward the Bay Area.

The National Weather Service also issued a “red flag” warning for both Wednesday and Thursday; warning of potentially “extreme fire weather conditions” for the “northern Coastal Range and foothills, the Sacramento Valley, the northern San Joaquin Valley, and the Northern Sierra Nevada and foothills below 6000 feet.” It’s the highest level for critical fire conditions.

“This is not something that we take lightly. We understand the importance of electricity to our customers,” said PG&E spokesperson Tamar Sarkissian. “However, the safety of our customers and the communities they serve is our most important responsibility.”

In a press conference on Monday night, San Jose Mayor Sam Liccardo urged residents and business owners to prepare for being without power for possibly as long as a week. Liccardo also told residents they should shelter in place since street lights and signals won’t be working in the event of a power outage, and encouraged households to create emergency plans and kits which include food and water for all family members and pets.

Listed below are pictures provided by PG&E of the communities affected by their power shutoff. Here is a wide view of the map showing a large portion of the Bay Area will have its power shut off early Wednesday morning. 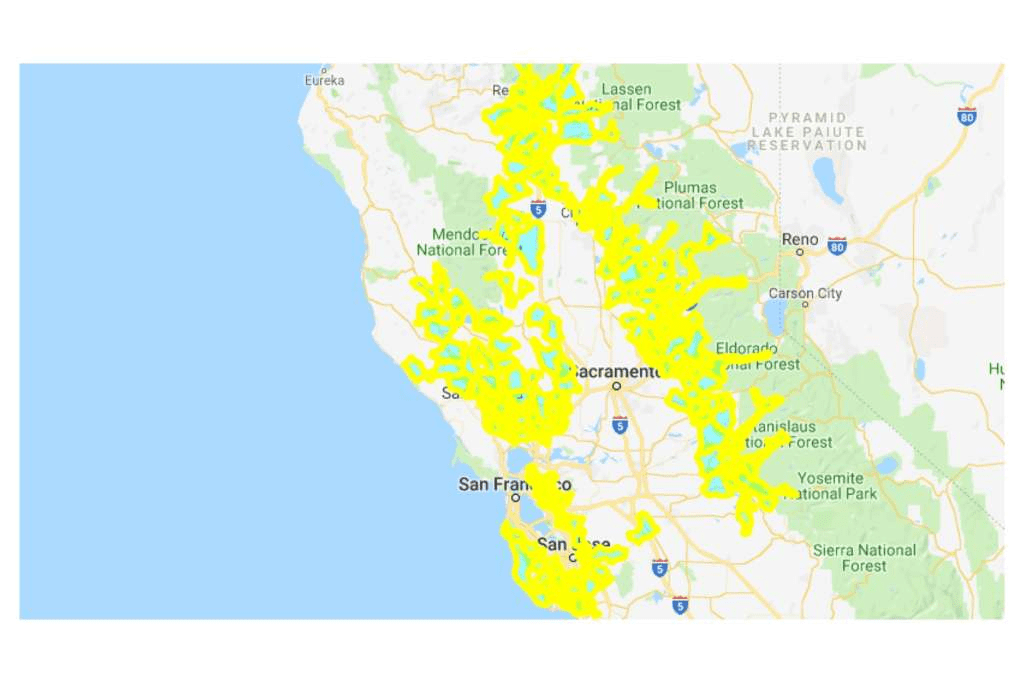 To see if your neighborhood will be affected by the power shutoffs, visit SF Gate.

Counties and cities that may be affected by the power shutoff include:

As an effort to support people in the affected areas, PG&E will open Community Resource Centers in 28 locations beginning on Wednesday, October 9, at 8 a.m. The centers will remain open during daylight hours only. Restrooms, bottled water, electronic-device charging, and air-conditioned seating will be available for up to 100 people at these facilities. Centers will be opened at the locations below: