The meaning of music can be subjective. It allows an artist to articulate emotions and feelings into a song or album which then gives the listener a space to relate, learn or simply to just vibe with it. KSJS is sharing what music mean to us and invite you to vibe with it. 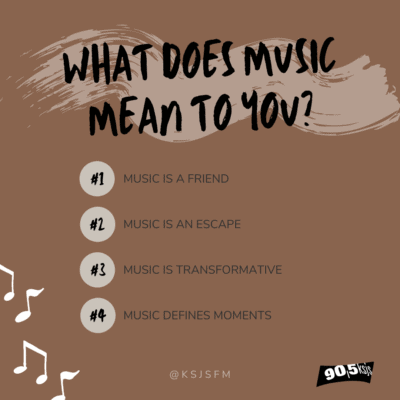 Music Is A Friend

Music to me means a friend, a thinking tool, a clearing your mind tool and another form of communication. What I mean by this is that whenever I feel like I need to release any type of emotion, I play a song that portrays  that emotion and as the song plays, emotion is released from my body or take over it. For instance, if I am mad or upset I play “Believe it” by Partynextdoor ft Rihanna and it’s like total peace and calmness. Rihanna and PARTYNEXTDOOR‘s voice contradicts but blends so beautifully together and the beat is smooth and the more Rihanna runs (a form of singing) the more I feel the anger leave my body as I focus on the melody. Or I’ll play “House Arrests Tingz” by NBA YoungBoy to make me laugh because as I hear him rhyme and create catchy lines I can almost hear him talking his mess, his truth and it calms me down because it makes me laugh and sort of relate to him because chances are I’m made because I wasn’t able to talk my mess or explain myself. So as he sings I sing along releasing my anger through the hard melody.

Anytime I’m overwhelmed, I stop what I’m doing and just focus on a song as the lyrics flow into my mind, everything else is gone, it’s just me, the beat, and the verses. I definitely can’t live without music because when I’m trying to find what words to say or explain how I’m feeling, I either overthink and have too much to say or not enough. But with music and the right song, it really puts everything you were trying to say and feel in words of music. I swear the connection I’ve built with music is based on how much I can relate to what the artist is saying, rapping, or singing. Lastly, music helps me feel happy and energetic. For example if I’m ready to go to a party or get lit I play “Aktivated” by Sada baby and it literally activates a hype mode in me, I’m instantly ready to hit the scene and have fun.   Written by Asia Tugbenyoh

Music Is An Escape

To me, music means an escape! Music is tranquility and fluidity of spirit within ones self. Music is expression, it is how I breakdown things for better understanding. The most valuable thing that music is, is different. One piece of music can  be 10 different things to 10 different people. Music is amazing! Music has always been my happy place. When I need to be alone and space does not allow for it, I drift off into my world of music. Rather it is music physically playing or the music in my own head, music in headphones or music playing aloud, even music of Mother Earth when nothing else is working. Just the way music transforms to be what you need it to be, when you need it to be it. Music transcends all boundaries. There is no black or white in music, the color is the sound. There is no class system to music, the hierarchy is the sound. Music is one part of life that literally connects us all and that is irrefutable! India Arie is a go to for me. When I am feeling like I am just not enough…India Arie, Video, reminds me that I am more than enough just the way that I am.

More often than not, I find myself listening to, what I call, mood music. I guess in a sense that would essentially be all music, but for me it is specific. Usher calms be, most of his stuff anyway. Destiny’s Child, Aaliyah, Mariah Carey make me feel unstoppable, Keith Sweat, Tevin Campbell, Luther Vandross, Marvin Gaye, they make me feel beautiful. All of these things are needed at different times, and there is so much more that music offers.

Let’s not forget, Kirk Franklin, Yolanda Adams, Cece Winans, Shirley Ceasar, Smokies Norfolk, Mississippi Mass Choir, Sounds of Blackness, Commissions 7, these gospel power houses can and will guide you through anything! These and so many more are go-to artists and albums for me, especially during hard times! There is no burden for laying your worries and stress of life on or in the music. There are no limits on music. Music is capable of absolutely anything. So, for me, music means my sanity, my ability to continue, it means my coping skill. Music, to me, means life!  Written by Tiamatha Thomas

Music is transformative, healing, and highly vibrational depending on the music you listen to. It can paint a picture in one’s mind or be an escape for the brokenhearted. It can tell a story and bring millions of people of Earth together. That is why I believe music is so important and has become a staple for society and many cultures.

I remember it being 2017 and SZA had just released her album CTRL. I can still recall the girl I was back then as if it were just yesterday as the album provides me a feeling of intense euphoria and has become an ultimate symbol of change and the growth of my inner garden. I remember going to her concert tour and being almost so close to her I could touch her, and this was a time before her huge fame. This is why SZA and this particular album will always have a special place in my heart. If you listen to the music she made for it, you would notice that she pours her heart into her lyrics and you can almost relive the situations about which she sings about along with her. On top of that, her voice is angelic and ethereal as if every time she sings you transport to a different dimension- a more calm dimension where everything sparkles as if it is covered with glitter and people love one another purely.

Garden (Say It Like Dat) has become one of my favorite songs on the album because of the particular effect she used on her voice to make it sound magical and the lyrics resonate with me highly. With my tendency to romanticize the world around me, music made SZA just speaks to me differently. Her music is why I believe music has the ability to heal and bring  groups together, no matter the size. On Twitter, every year the birthday of the CTRL album comes up, everyone comes together to say that they miss what life was like at that time. That instead of just singing about heartbreak like we did in 2017, now we’re just living it.   Written by Michaela Serna

Music Is A Language

I think music is the language of the world, and it is the best and direct way to share, to feel, to resonate the emotion with each other. One artist that really resonates with me is Michale Jackson. He is like the most shining star in the sky of music. His personality and his music is outstanding. Black or White, Heal The World, and a lot of other songs. I could feel the positive and passionate he wanted to tell and share. He loves the world, and many of his songs are about environmental protection, children, and resistance to racial discrimination. The mastery of songs is like innate, the rhythm, feelings, and words are very special, his interpretation of the song, he not only sings according to the lyrics itself, but also adds a lot of rich consonants, such as his iconic hey~hey, his ao~oh~, hiccup-like breathing sounds, and powerful bbox. I could not imagine a world without the music. It would be the world without color. It would be too flat, lack of emotion and love.

Music is the best way to connect people with each other, and a place that people could get relaxed, get inspired. Music is too important to have, without classical music, we would not hear any piano from Beethoven, without music, we would lose so many great musicals that cheered us from the hardest time to overcome the difficulties. For me, I think without the music just like a person without the soul. Just imagine, could we watch a movie in black and white without any music? Music is necessary to exist in this world. There are lots of things music can do for me and that other things can’t. Encourage me and get me relaxed. Music is the fastest, and easiest way to relax, feel the pace and beats, we could feel the whole story of the music. With music it gives us the motivation to be created, to be positive, and to connect to the world. Written by Xichu Shi

For me, music is the part of life which defines any moment. It’s a huge importance in enhancing the mood, the vibes, and the soul of everything. One artist that really resonates with me is Tyler The Creator. His vast, bold, and different personality sticks out with me and clicks, showing he doesn’t care what others may think of him. I love his creative personality, as he allows much freedom in the way he represents himself. His music really touches my soul, allowing me to better understand myself in a way no artist has before.

It’s hard to put it in words, but his music allows for me to stay strong in my world. In a world without music, I would have no idea what I would do. The world would be flat, dull, and boring. Parties would be weird, dancing would be non-existent, and iPods would never have been a thing. Movies wouldn’t be anywhere near where they are now, as music is probably the most important key to films other than actors. Who would even want to watch a movie without music? Even during the silent film age, bands would still play over the film to add an extra layer of emotion.

Music is a must in the world, it’s the one thing that can drive emotion and impact in people’s lives. What music does for me is incredible. It allows for me to sink into another world, forget my troubles, and live in a good state of mind, even if it is for a moment. It also allows me to remember the good days of my life, bringing back so much nostalgia to places where I listened to the song. It’s almost like timetravling for me. You can’t relive the past, but music almost makes that possible. Music is a huge part of everyone’s lives, allowing for people to connect together, create personality, and is a way to represent one self.  Written by Quinn Stenehjem