In the month of THANKS and being THANKFUL, KSJS has compiled together a mixture of artist we are thankful for. Music can play all types of roles in our lives and as an underground radio station, we hope to deliver the songs that help you form lasting relationships, create memories with family and put you on your future favorite artists. Enjoy this blog post as we share why we are thankful for these musicians. 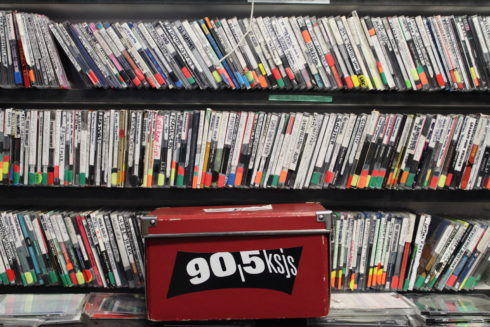 One of the artists that I am most thankful for is Travis Scott. He has made incredible songs, most notably his Astroworld album. It wasn’t long ago when I first discovered Travis Scott, which was two years ago when my brother introduced me to him during Christmas. Let me preface that my brother and I haven’t seen each other in a while since he moved out, and it had been a while that he stayed for the holidays at my parent’s house. Later on that night, he put on Travis Scott. Not hearing anything from that artist before, I was blown away. We listened to the entire album, Astro World in one sitting. Not only did we listen to the album, this allowed us to reconnect and talk about things we have never discussed before.

The songs that stuck out the most were STARGAZING, by far. Two songs packed into one was a genius idea, and totally unexpected. Especially the second part where the beat just drops out of nowhere.This was the most chill experience that I can remember, and I am thankful for Travis Scott for this memorable moment. Everytime I hear one of Travis Scott’s songs, I recall that night and remember the good vibes that we had.  Written by Quinn Stenehjem

Rebecca Sugar and the voice actors for Steven Universe

This is a little embarrassing, but artists I’m thankful for are Rebecca Sugar and the voice actors for Steven Universe. The entire soundtrack for Steven Universe pulls so many of my heartstrings, especially the credits song “Love Like You”. It was after the funeral of one of my friend’s I decided to pick up the show. During the funeral two of our friends did a cover of “Love Like You” to commemorate him. Steven Universe was his favorite show and he would literally talk about it to the point it was annoying, but after hearing the song and how it perfectly described how compassionate and loving he was I just had to see it.

Initially I didn’t think I would like the show very much because of the light hearted tone, but the subject matter and especially the music drew me in. I absolutely fell in love with it. The show itself advocates for compassion, acceptance, love, and understanding, but it’s through the songs and the amazing voice actors/singers that really bring those ideas to people’s hearts. It wasn’t just the association with a friend who recently passed away that the show got me to be very emotional, but just how relatable the numerous and expansive subjects and character storylines are.

I feel it’s during the singing portions that the emotions are conveyed the most clearly. A great example of this would be Deedee Magno Hall, the voice of Pearl, singing “It’s Over Isn’t It?”. The song is about a situation that’s very specific to her, that few may be able to relate, and especially not me, but I still felt like I could make an emotional connection with her. This ability to convey emotion is what I think makes music from Steven Universe so special.  Written by Aldrich Julian Lucero

This memory–that emotion–it overcomes me. Three Love Songs by Ricky Eat Acid reaches from below metaphorical waters, holding my body suspended in a single moment. A loving moment. It’s some place I’ve known for so long, some place between infinity and a loved one’s smile. I smell everything all over again. God, how that summer air ran through my shirt sleeves.

It’s sunset, and I’m back in my hometown. I imagine I’m listening to “Inside My House; Some Place I Keep Dreaming About” while the summer wind whispers as I bike along the riverbed. It smells like the ocean here. The cotton-ball clouds are pink on the Sun’s side, lavender on the Moon’s. The last rays of that tired sun warmed my cheek then, before it softly let me go until morning. And the hazy mountains reached halfway into the sky, enough to look like you could walk to its base with ease–it’s actually an hour drive. I’m engulfed by the fading colors into twilight, and I always see Venus or Mars or Jupiter looking back. There’s real beauty if you keep your head up. I’m happy on Earth at this moment.

I know I’m riding the bike fast, but I let my arms fall to my sides and close my eyes. For a moment, I find that solace inside myself. For a moment, I’m really alive. Written by Oliver Cervantes

Michael Jackson, The pursuit of perfectionism, the pursuit of witty music, a genius with innocence and ambition. I still remember when I first listened to his song – Heal The World. I felt that he was not writing a song, but saving the music. Although there were a lot of arguments about him while he was alive, even after his death. However, everytime time I listen to his music, I can only feel the peace and love, maybe that is the magic of music.

I had a hard time overcoming the study challenge during that period, and that was also the first time that I began to listen to Michael Jackson’s music. It gave me a time to enjoy the music and relax, and the most important is it encourages me to overcome the challenges I had. I could feel the passion and love from his songs. They Don’t Care About Us really encouraged me and gave me the motivation to finish the study which I thought I would never pass. I think his dance and beats of music is the stuck out part, it seems his rhyme is alive with positive energy for the audience to listen. His vocal range is extremely wide, he can freely switch from extreme to extremely high, and his voice control is super strong. A sentence of lyrics may span multiple vocal ranges and is extremely natural. Representatives of this are butterflies.

All in all, until today, I still think no one could replace his contribution to the world and the music, he is still the king of pop.  Written by Xichu Shi

On July 20, 2017, Linkin Park’s frontman, Chester Bennington took his own life, and I feel like the world hasn’t been the same since. Linkin Park was and still is one of my favorite bands and a lot of their music has helped me through some dark times in my life. And as heartbreaking as Chester’s death was to his family, loved ones, and to his many fans like myself, I like to think that it has helped open the reality and importance of mental health and mental illness to be specific. It just goes to show that you can be successful and seem to have the perfect life, and still be a victim of depression. Especially now, with the results of Covid-19 and the subsequent quarantine, job losses, and even the loss of loved ones that have befallen on so many. Depression and suicide have been more prevalent than ever.

I guess I just want to mention how important it is to take care of yourself both physically and mentally. In a time where we may often feel so divided amongst each other, perhaps music can be the metaphorical glue that helps rebuild that bond and reunite us. Thank you Linkin Park and Chester. Thank you for all of the love and passion you have put into your music, and for all of the fond memories you have given to so many people. You will forever be in our hearts, Chester.  Written by Edward Allen

High school can be rough, so music was definitely a place that was helpful to get lost in. Growing up with an older brother and older cousins who constantly was blasting 90s hip hop was a huge privilege, because not too many 10 year olds were accustomed to the sounds of Souls of Mischief, Tupac, Biggie, Eazy E, Nas, Lauryn Hill and the list goes on. My dad, a Tongan Immigrant, held onto his memories of the island with Tongan spiritual hymns along with the soothing sounds of UB40. To my knowledge, every Tongan dad listened to UB40 and Bob Marley. My mom grew up with Madonna and to this day one of her favorite songs is Jessie’s Girl  by Rick Springfield.

With the variety music that I grew up with, there were so many artist and musicians that I want to thank because of  their music or lyrics, which helped me create lifetime friendships and helped me process emotions at different life stages. Having only choosing one musician to be thankful for, I choose Blackbear. My best friend and I discovered him on Soundcloud and ever since then we’ve just loved him. His songs talked about mental health, drug addictions, social life and relationships. All of them were raw but still playful. Sometimes songs talk about the bad and ugly aspects of life but then ends on a happy and hopeful note. Blackbear’s music was more relatable to me because it describes the bad and ugly and doesn’t give a hopeful end sometimes, which I think mirrors reality. Sometimes we have bad days and they are just bad. In reality, it is okay to be sad or experience a hard time.

In his song, dirty laundry, Blackbear pairs this upbeat sound with lyrics of not being wanted due to the dirty laundry he carries. I think too many songs voice their view on looking forward to the end or the light at the end of the tunnel, whereas Bear’s music talks about what it’s like being present in the tunnel. The tunnel representing different aspects of life that may be hard. In the words of Miley Cyrus, its about the climb and that is why I appreciated Blackbear and his music throughout the years. Written by DJ Dippin