Bay Area Culture is full of music, language, food and the list goes on. There isn’t anything like the Bay and the Bay Area lingo matches that same vibe. Follow along with Michaela as she educates y’all on what “slap” is and how you should be using it. 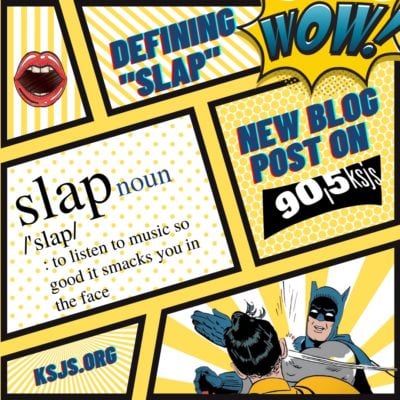 Have you ever listened to a song so good it felt like a slap to the face? But like the good kind? Well, that’s what I believe a slap is. A slap is defined by being a song so good it smacks you in the face. It can also be used in the verb tense to really good music in the car, at a party, or whenever someone throws you the aux cord.

The term was originally coined by Bay Area legend and rapper, E-40, who says the word started as something he’d say about the intense bass of his music beating on his trunk, then he watched it transform to the level of a good song or hearing it a good song play, and now he makes fun about the way that people use it incorrectly to describe the taste of their food or drink. There was even a video of him on Twitter clarifying the use of the word to those using it incorrectly inside and outside of the Bay Area. E-40 even says that the way in which you use the word shows where you come from.

I love using the word slap to describe music because when you say a song slaps, I know I have to listen to it carefully and prepare myself to vibe super hard to it. Most of the songs that I consider slaps don’t necessarily fall into the same genre either. When E-40 created the term, I like to imagine him listening to his own records in his car and the intense bass that would radiate from it. Although this term was originally coined to describe the hyphyness of his rap music, I’m glad it has transformed in the way that it has. I can’t imagine describing my favorite music any other way than to refer to it as a slap. If you’re from the Bay Area and haven’t yet used the word or hesitated because of all the misinformation, I hope this post brought you clarity and you know that it’s your right to use the word as a Bay Area native. Word to E-40!