Last Friday our #24 ranked San Jose State Spartans defeated the Nevada Wolf Pack with a score of 30-20 to improve their record to (6-0) and earn their spot in the Mountain West Conference Championship game next week. The win also confirms their spot in a bowl game no matter the result of their next game. 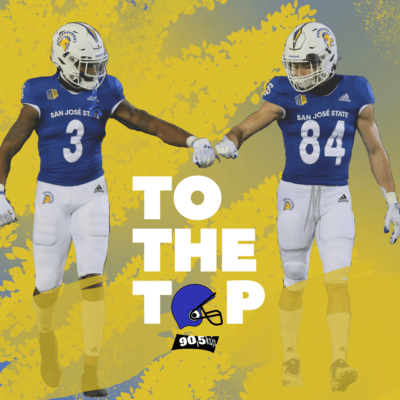 The game against Nevada started off with the Spartans trailing after Nevada scored on a 42 yard field goal early in the 1st quarter. The Spartans would respond with a 33 yard touchdown pass over the middle of the field by Nick Starkel to receiver Jermaine Braddock. However, Nevada would then march right down the field and score their first TD to end the first quarter leading 10-7. The second quarter ended up being worse for the Spartans as Nevada would double their scoring effort with a 43 yard field goal and a 1 yard TD run to make the score 20-7.

The Spartans however would not go quietly into the night, as freshman running back Shamar Garrett opened the second half explosively with a 98 yard kickoff return. The Wolf Pack would be held scoreless in the second half while the Spartans would add two more TDs in the third. The first score came off of a five yard pass to Derrick Deese Jr following a 12 play, 99 yard drive, while the second came off of a 1 play drive where Tyler Nevens had a nice long 69 yard run. The Spartans added on 3 more points with a 27 yard field goal to end the scoring at 30-20. 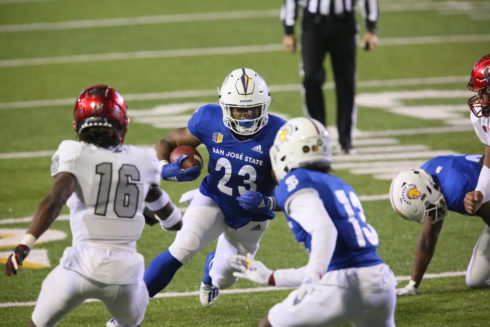 Tyler Nevens continued his hot streak to end the season, carrying the ball 12 times for 184 yards, which makes this back to back games with 100+ yards rushing. Nick Starkel threw 306 yards with 2 TDs and 1 INT, with his two top receivers being Bailey Gaither (with 150 yards receiving) and Tre Walker (with 80 yards). Defensively the Spartans were flying all over the field, with 4 sacks and 2 fumble recoveries.

After the game, which marked the end of the Mountain West regular season, the Conference announced its own personal awards, in which twelve Spartans were honored. Five Spartans were honored as first team Mountain West, with the offense being represented by WR Bailey Gaither and LT Jack Snyder, while the defense was represented by DL Cade Hall and Junior Fehoko, and LB Kyle Harmon. On the second team, S Tre Jenkins represented the defense, while QB Nick Starkel and WR Tre Walker represented the offense. TE Derrick Deese Jr, K Matt Mercurio, and S Tre Webb were listed as honorable mentions to round out the All Mountain West honors. Moving to the big awards, two Spartans were honored, with Cade Hall taking home the award for Defensive Player of the Year, while Brent Brennan won the Coach of the Year award for his efforts in leading the Spartans to their only undefeated regular season since 1939. The Spartans however are not done yet. As the season has gone on, players and coaches alike have made a similar statement, “We are climbing the mountain.” This “mountain” can clearly be seen as the Mountain West, and with the best record in the conference the Spartans are nearly there, but one thing still remains before they can reach the top.

As mentioned previously, the Spartans move on to the Mountain West Championship game where they will take on the (5-1) Boise State Broncos on Saturday at 1:15pm. Boise State comes into the game as favorites to win, with ESPN giving them a 68 percent chance at victory. Boise is playing in their fourth straight Mountain West Championship, winning 2 out of their previous 3. This marks the first appearance for the Spartans in the Championship since their arrival in the Mountain West in 2013. The winner of the game will go on to face the Champion of the Mid-American Conference (MAC) in the Arizona Bowl on New Years Eve! SJSU is holding a virtual Pep Rally on the 18th at 12pm where school President Mary A. Papazian, Athletic Director Mary Tuite, Head Coach Brent Brennan, and members of the Spartan football team will be present!

We would like to give a shoutout to broadcasters Mark Aziz and Chad Oklin-Jolie for their at home broadcast coverage of last week’s game! KSJS will have live coverage of the Mountain West Championship game on 90.5 FM and online at KSJS.org/listen.