Spring is upon us, and for the sports fans of SJSU that can only mean one thing: baseball. We might just be in the weaning days of a pandemic, and spring baseball is just one more sign that a return to normalcy is right around the corner. 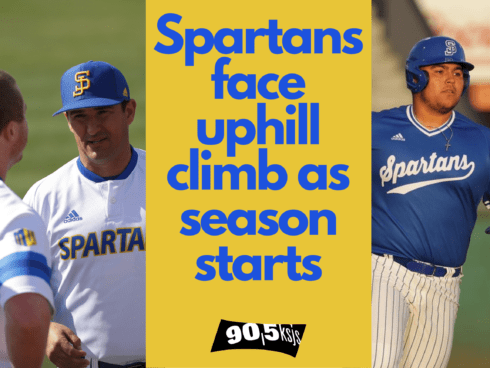 If 2020 has taught us anything, however, it’s that nothing can be taken for granted. And just when it looked like SJSU baseball would be back, the dreaded COVID-19 protocol reared its ugly head once again. Instead of starting the season against historic rival Fresno State on February 27th, the Spartans will have to wait another month before starting their season with a double header against SDSU, the team many have picked to win the Mountain West Conference. “In terms of game experience, we are going to be a bit behind. But I think that’s totally fine with the group of guys that we have,” says pitcher and recent Oregon transfer Keaton Chase, whose just one of the many new faces on the team forced to find their role quickly and get acclimated amidst zoom meetings and social distancing. Washington State transfer Nelson Padilla felt the same way. “It’s tough not being able to get to know everyone,” he said. “I think this year is going to be a lot of adjusting and learning on the fly.”

The pandemic has put many in a tough situation, the team’s coaching staff notwithstanding. This adversity helps to highlight the leadership Coach Brad Sanfilippo has demonstrated in his 4th year with the team. “Normally it’s an organic process, but this isn’t normal. We’d come in August or September and get into the weight room together, go to football games together, and this year the interactions are very limited,” he said when asked about how the team is coming together. “We are used to playing Friday-Saturday-Sunday, so these double headers really change how you run your pitching staff and your starters.” Doubleheaders could be a real obstacle to a team with an already cluttered schedule. The rest of the Mountain West Conference has already been able to start playing, meaning the Spartans will start the season against opponents who have already had a month to get issues ironed out. Recognizing that they will start on an uphill climb, Coach Sanfilippo is trying to look at the positive as well. “It’s also gonna give a lot of guys opportunities to pitch and to prove themselves [on the field],” he said. “The construction of this roster and the new guys that we brought in will change that a little bit. This is the first time since I’ve been here that we’ve got some real depth. The biggest question right now is the pitching and what roles our guys will fit into.” Coach talked about having to change the roles of some of his pitchers, moving guys that are usually relievers into a starting role in order to give others rest. But he has faith in what his people are doing, adding “Coach Moyer was at UCLA when they won a national championship… I really like what he’s doing with our pitching staff right now… I would tell you if I think we would struggle… we’re excited to play.”

It was just around this time last year that the coronavirus became a reality for the team, when the season was postponed and subsequently cancelled after a close 8-9 loss to UC Berkeley on March 10th. “[When the season shut down] I thought we were in a good place. Our record didn’t show it, but we were starting to come together,” said Coach Brad. First Baseman Ruben Ibarra added “it didn’t hit me until we couldn’t field a team against San Diego State… I didn’t want to show any signs of fatigue or emotion but I know internally for myself and my team that it did take a toll… we had a whole fall training, coming back from winter break literally driving our faces into the dirt just to play some baseball and then it gets taken away. It was heartbreaking.”

Despite the uphill climb and adversity the Spartans already face going into the season, Ibarra is looking at it in a different light. “As a veteran, you want to go into the season saying ‘I am so grateful I can put my cleats back on, go out there, and play.’ A lot of us are very hungry to get out there and play someone else.” In part because of the delayed start to the season, SJSU was picked to finish last in the Mountain West Conference in a recent coaches’ poll. “I love being in an adverse situation where no one expects you to be good… it fires me up because we post it [the articles] everywhere in the locker room, in the coaches’ office, and in the cages… they add fuel to the fire, and that fire comes out aggressively,” Ibarra stated. “We can go into a game thinking ‘we have nothing to lose, so let’s just leave it all out on the field.’” That fire is going to be tested right out of the gates, with SJSU opening the season with a doubleheader against top ranked San Diego State. “Those ranking polls are based off of last season, I think it’s unfair to judge the team from last season when we have a lot of new guys [including myself] coming in” said Keaton Chase, “I think we will win a lot of games.”

You can listen to the Spartans’ first doubleheader against San Diego State on March 27th only on 90.5 KSJS. 90.5 KSJS is the best place to hear broadcasts of all of their games this season. Spartan Up!