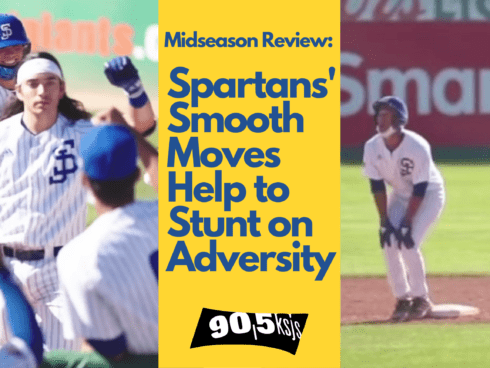 The Spartans are just 8 games into their condensed and socially-distanced season. Nevertheless, it is time for a midseason look inside the locker room to understand how a team that has had to bear the brunt of this pandemic is coming together and rallying in spite of it.

Taking a look at the Mountain West Conference standings today would tell you the Spartans are in last place, but they certainly don’t play like it. Their only conference win came against top-ranked San Diego State in what was only the Spartans’ 2nd game of the season. The Aztecs had already played 16 games prior to their 3-game series in late March. SJSU followed up their performance with wins against Cal Poly and UC Berkeley, proving that they can compete with anyone. “I think our strength right now is just resilience… I don’t think many people had high hopes for us against SDSU in that first weekend. We could’ve easily beat them in the first game, the next game we really took it to them,” said outfielder Jack Colette.

The Spartans started off the season with a worst-case scenario: full program lockdown due to COVID-19 protocols that led to the postponement of their first 12 games. That means that while every other school in the conference got to start their seasons and build important chemistry, SJSU had to wait on the sidelines for the all-clear. This early season adversity was answered with a strong start given the circumstances, already proving doubters wrong. “Guys are still figuring it out because some of us haven’t played baseball in over a year,” said pitcher Keaton Chase when talking about some of the visible rust players have had to shake off.

“You don’t really adjust to it… we tried to do the best we can, but it’s weird not being able to get out there on the field with your teammates,” said outfielder Nik Trapani. For many on the team, the pandemic lockdown was the longest period they had gone in recent memory without playing baseball. Now, they must play catch-up with multiple games a week, and sometimes 2 games a day, in order to complete the regular season by the end of May. Still, players are finding the silver linings of their predicament. “[the condensed season] means if you have a bad game you can bounce back in the next one… I don’t really think there’s a negative aspect to playing more baseball” said Chase.

Fueled by lockdown angst, credit has to go partially to Coach Brad Sanfilippo for how well the team has responded to adversity. Ruben Ibarra added to this saying “[Coach Brad] always talks about when you get punched in the mouth, how are you going to answer back?” The team seems to certainly respond to his message, and although it hasn’t shown up in their record just yet, don’t be surprised if by the end of the season we are talking about SJSU in the Mountain West Conference playoff picture. “Coach has told us a lot this season how much he enjoys coaching us, more than he has in seasons past. I wanna play as hard as I can for him… I’d run through a brick wall for that man,” said Ibarra, and he’s not the only one.

Sanfilippo used to coach the Cal Bears, so beating the program was extra sweet for the team. “I’ve been here 3 years and this was the first year we beat Cal… It was a big win for us, our coach really enjoyed it,” said Nik Trapani. And while one win at the beginning of the season may seem small, these are the moments that can bring a team together, and they already know how to celebrate with a signature dance move: the double-dance. “You put your hands on your knees and throw your knees in a circle. Everyone does it and it’s the funniest thing, I don’t get it but when we do it, everyone gets rallied,” explained Ruben Ibarra, who must have been a choreographer in his past life.

The energy on this team is noticeably different, and opponents need to come prepared when they step onto the same field as the Spartans. They have taken advantage of their time off, and are ready to crash the party. Nelson Padilla captured the mood around the team in saying, “we’re excited! You practice and practice, but you gotta let that dog eat, you know?”