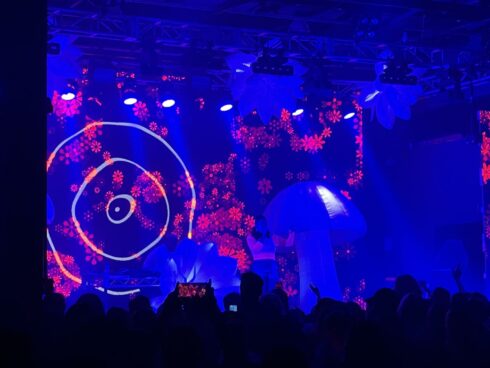 On October 7th, Princess Nokia played the last show of her US tour at The Midway in San Francisco. Being a Puertorican native, the excitement she generated for her first US tour was incredible.  Looking like an anime character on the stage and dressed as a bunny rabbit, she hopped around a neon lit mushroom-forest stage and gave her fans positive energy and affirmations as she performed a mix of her Spanish and English songs for her fans. The Midway was a small venue that had so much energy.  The excitement her fans emphasized on her was so natural, it was inspiring to see fans be so excited to see someone live. 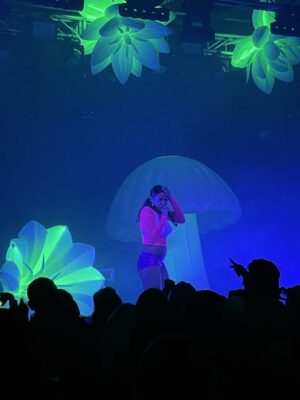 At one point, Princess Nokia had said hello to a fan in the front row, tearing up as she mentioned that this fan had been watching her perform since 2016. I wondered how exciting it was for her to recognize someone who had been watching her for so long, especially as a bilingual artist must be unmeasurable. As someone who isn’t familiar with Princess Nokia as an artist, the only song I recognized was called “I Like Him” in the middle of her set. Thinking that it was one of her more popular songs, I was surprised that she performed it in the middle of her set rather than the end. As she mixed in her songs in Spanish, she finished her performance with “Bart Simpson” and her fans went wild. At that point, I finally understood her fans’ excitement. Princess Nokia shared that the reason she became a rapper was because she was good at writing poetry, not rapping.  She’s admirable because she tries to spread that positivity with her fans.

Something that I notice in rap culture is trying to flex or be someone they aren’t, so I find it admirable that she shared the fact that her songs literally derive from her personal diary.  From a viewer perspective, it’s inspiring to see the vulnerable side of an artist and the energy that they want to give back to their fans. I’m thankful for this opportunity and for KSJS for allowing me to see this incredible, bilingual artist.