I was quite excited to be returning back to the Catalyst after having visited two years ago to shoot another show. I did not realize it at all, but the Catalyst actually has two stages. One main stage with two balconies on both sides and a smaller stage to the left of the entrance. 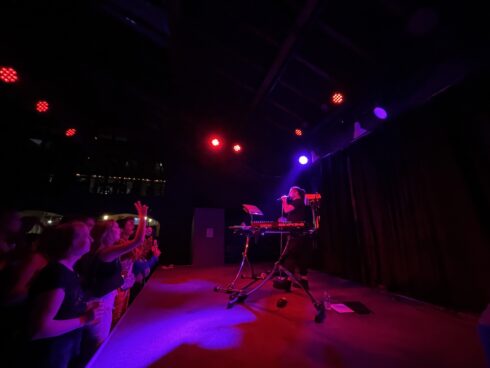 Elderbrook’s performance took place on this smaller stage, given it was a Tuesday and the room was not entirely filled. He was also supported by Gilligan Moss in the opening performance. Though not being as packed as a usual concert that you would see, the room was actually filled with more college students, given UC Santa Cruz is only down the way. And I’ll definitely tell you that the venue is definitely way more laid back on what happens, and depending on your vibe, it might just be your thing. Though Elderbrook is a producer for one who makes progressive house, there were actually some concert-goers that were hopping on stage with him, ironically in tiger onesies because the show was so close to halloween. I actually rooted for them because when do you ever see people in tiger onesies on stage? I honestly had a pretty good laugh at that. As you might think, he had CDJ turntables, but he actually did not to my surprise. 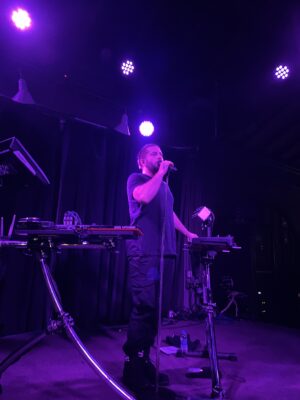 Elderbrook’s performance was more so a live performance which I actually liked. He had a few synth pads, keyboards, and sample pads with him, and to my surprise too, he was even singing his own songs at a pretty high pitch, something I honestly did not expect at all given this guy has a full grown beard. I think that was just the best part of the show. The lighting in general was pretty par as I would say, nothing too special to expect from a smaller stage, but the purple lights definitely accentuated the tone of the music and Elderbrook’s overall vibe that he wanted. If you’re looking for a good drink, I would definitely recommend getting something from the bar too. I personally have gotten an AMF, and let’s just say that you will definitely get your money’s worth for any drink you ask for. I also feel like house music isn’t as much appreciated enough in the bay area after knowing the younger generation’s preference of electronic music.

Altogether, I do wish this show would have been on a Friday night or weekend because I personally do believe there could’ve been a larger crowd turnout to appreciate the great music that was played that night. Yet if you are an avid listener of progressive house, I would highly recommend seeing Elderbrook.