On November 14th, I attended the $uicideboy$ concert at “The Midway” venue, within San Francisco, California. The show was yet just one of the many locations for their “GREY DAY” tour, which not only includes rappers “Ruby” and “$crim” of $uicideboy$, but other popular figures within their independent label G59, and the underground rap scene. Artists such as Shakewell, Ramierz, Slowthai, and even a new age hardcore band “Turnstille”, all performed an out door set. 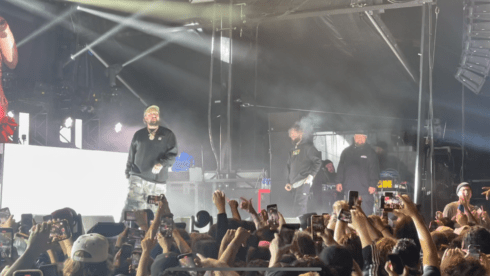 The Midway is a pretty interesting venue, while it has a small indoor section that was used for the merch lines, most of the action takes place outside. There is a fairly large stage set up towards the back of the venue where the audience can crowd around and watch the show, standing on cement. This was actually my second time attending this venue, as I saw the group once before already back in Summer 2019. Experiencing this concert was nothing more than fantastic. My friends and I were pretty lucky to get there early enough to snag a decent spot towards the middle front of the stage, and remain there for the rest of the night. The show was sold out, and later on, began to become extremely crowded. The show started off with well known G59 rapper, “Germ”. However, I was not able to catch his set because I was waiting within the merch line. After my friends and I left the line, Shakewell, Ramierz, Slowthai, and Turnstile followed. Shakewell, Ramierz, and Slowthai, all killed their sets. Lots of loud bass blared out of the speakers as they rapped their songs, which was followed by various mosh pits and energy from the crowd. Turnstile took me by surprise, because they were an actual hardcore punk band at a mostly rap dominated show. However, they certainly fit the energy and vibe of the tour, being that most of these types of rappers incorporate rock influences in their music. This subgenre of hip hop and it’s loud bass and yelling over beats embodies the rockstar energy similar to the punk and metal scenes. It didn’t feel like a dull moment at all. 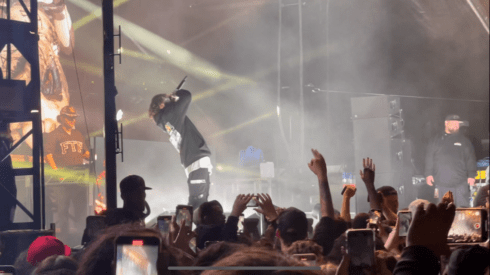 When $uicideboy$ came on stage, the energy was insane. They slowly walked out of these inflatable skulls on stages with flashing lights to fit the dark aesthetic their music embodies, and instantly began rapping one of their newer tracks. After this track, they performed “If Self Destruction was an Olympic Event, I’d Be Dead”, which resulted in jumping and moshing. The rest of the show was filled with fans screaming every lyric, and the duo really did their best to joke around and connect with the crowd. The experience felt intimate and made you feel as if you were family. They would often even ask fans in the crowd what songs they want to hear next. Although the show was a fun time, I could tell the duo and the crowd overall was a little bit more on edge this time around, due to the unfortunate events and deaths that occurred at Travis Scott’s Astroworld Festival. Ruby and $crim would ask the crowd to take a step back at least five times within their set, as the people towards the front of the barricade were running out of room. I do appreciate them doing this, and even though we had to put safety first, we still were able to jump around and have mosh pits in a controlled manner. Towards the middle end of their set, things took a sharp turn, as some people in the crowd were causing fights and getting out of hand. These happened repeatedly throughout the set, eventually leading Ruby himself to leave the stage as he was angry their set kept getting stopped. Luckily enough he was able to catch his breath at the end, and he and Scrim closed the show with a motivational speech to the fans, and a live performance of “ And To Those I Love, Thanks For Sticking Around”, the hit song that got them very popular amongst youth on Tik Tok.

Overall, I’d say we all had a blast at this show. Being someone that has listened to their music and some of the rest of the G59 label for at least four years now, it’s great to relive the past a bit as they played some of their old tunes, as well as embody the evolution of their sound within the newer projects. The concert was an experience I could ask for and I would not change anything about it. My only advice for people that attend these events is to be respectful in the crowd and to others, as we are all just there to have a good time.